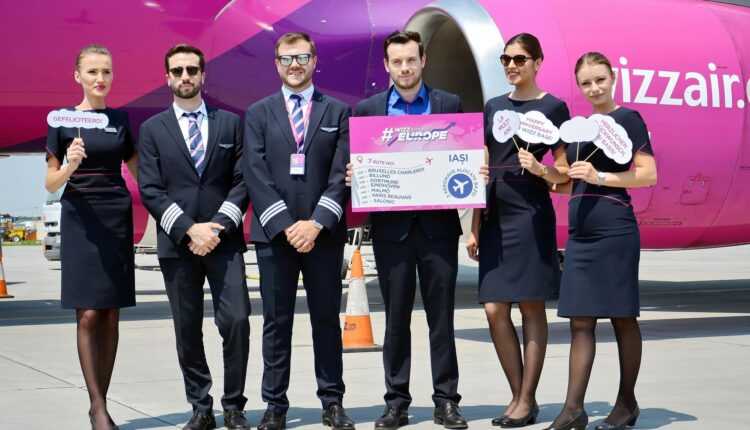 Wizz Air launches 7 new routes with the two-year anniversary of the inauguration of the base in Iasi and the allocation of the second aircraft in the local fleet. The second Airbus A320 with 180 seats will ensure operations for the newest routes from Iasi to Billund, Brussels Charleroi, Dortmund, Eindhoven, Malmo, Paris Beauvais and Thessaloniki.

By Sorin Rusi Last updated NO ONE. , NEVER
0 258
Share FacebookTwitterPinterestLinkedinWhatsApp

At the same time, Wizz Air will increase frequencies on 2 popular destinations: Milan Bergamo and Tel Aviv. In total, the WIZZ program will include 20 of additional weekly flights departing from Iasi.

2 years of Wizz Air at IAII

The total investments in the base in Iasi exceed 200 millions of dollars (cost of aircraft allocated). Wizz continues to support the local labor market. The company has a local team of over 70 of aviation professionals, and its operations facilitate over 280 of jobs in tangential sectors.

In the first six months of 2018, more than 190.000 of passengers from Iasi traveled on board the company's aircraft. There was an increase of 15% compared to the same period last year. It is an increase that indicates the increasing demand for WIZZ services and its low tariffs.

Wizz Air is one of the largest airline operators in Romania. Offers 141 routes to 22 of countries (including domestic flight Bucharest - Cluj-Napoca), throughout Europe, from ten local airports.

In 2018, 21 new routes have already been announced from Romania, to popular destinations such as Athens from Bucharest and Cluj-Napoca, Nice, Lyon or Malmo and Thessaloniki from Iasi.

Wizz Air operates from ten airports in Romania with a fleet of 25 aircraft, including new and ultra-efficient 5 Airbus A321, with 230 seats, and a team currently made up of more than 1.000 of local employees.