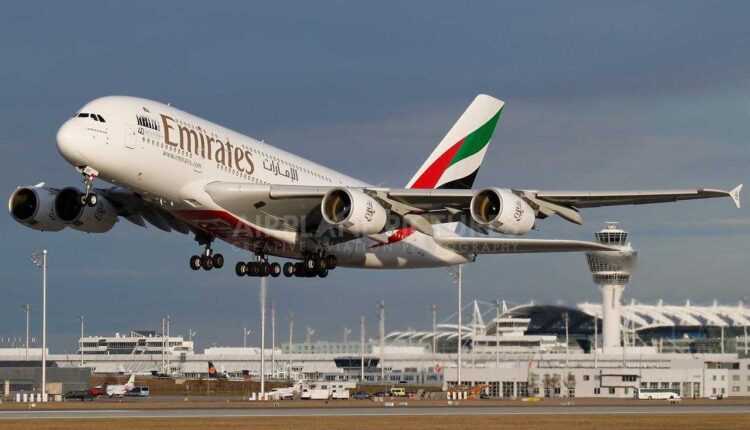 2013 retrospective for Emirates: over 164 000 operated flights and over 43 for millions of passengers carried

Emirates drew the line for 2013 and presented the retrospective. It was a good year and with great achievements for "The best airline in 2013" (Skytrax). The Emirates Fleet flew over 751 million kilometers throughout the year and we could say that has surrounded the Earth 18753 times, if we consider that the circumference of the planet at the Equator is 40075 km.

Emirates aircraft operated 164 635 flights and transported approximately 43 million passengers. Emirates hopes to carry over 70 millions of passengers to 2020. Emirates Flight Catering has loaded on board aircraft over 46 millions of menus. The day record was reached on 20 December 2013 when it loaded 157308 menus. 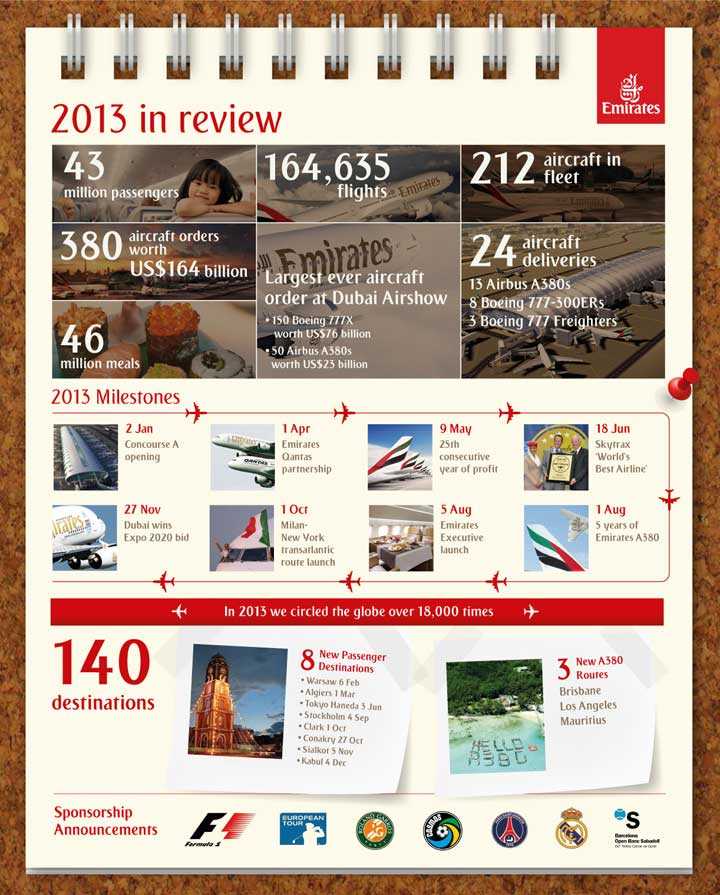 The biggest achievements according to the months of the year:

In January 2013 was inaugurated the Concourse A terminal, the largest terminal dedicated exclusively to Airbus A380 aircraft. It is approximately 800 meters long and configured with 20 gates.

On April 1, 2013 entered into force the global partnership with Qantas. Together, Emirates and Qantas offer 98 weekly flights between Dubai and Australia, including 4 daily flights with A380. They operate together the largest fleet of Airbus A380 aircraft to destinations in Europe such as: London, Paris, Moscow, Amsterdam, Munich and Rome. Emirates and Qantas "arm" over the Sydney Harbor Bridge.

On 9 May 2013, Emirates announced the 25 consecutive year in profit. For the financial year 2012 / 2013, the Emirates Group announced a net profit of 3.1 billion United Arab Emirates Dirham (AED) (845 million US dollars), up 34% compared to the previous financial year.

On June 18, 2013, Emirates was named "Best Airline in the World" in a ranking provided by Skytrax. The prize was awarded at the aeronautical fair Paris Air Show 2013. It also received the title of the best airline in the Middle East.

On 1 August 2013, Emirates celebrated 5 years after the first Airbus A380 flight . During this time, 7000 flight attendants and 650 pilots made sure that over 18 millions of passengers enjoyed the comfort and services offered on board the 35 Emirates A380 aircraft. At the end of 2013, In the Emirates fleet are 44 Airbus A380 aircraft.

From the 4 September, Emirates has begun operating the Dubai-Stockholm route. The flights are operated with Boeing 777-300ER aircraft, which are configured in 3 classes and with a total 354 seating capacity.

Starting with 1 October 2013, Emirates operates the Milan Malpensa - New York route, an extension of a daily 3 flight between Dubai and Milan Malpensa.

At the Dubai Airshow 2013, Emirates ordered 200 aircraft (50 of Airbus A380 aircraft and 150 of Boeing 777X aircraft). The order was valued at 99 by billions of dollars, the largest in aviation history.

Emirates is one of the few airlines in the world that can boast such a year. Happy birthday and an 2014 at least as good!

"Aviation is a force for good" - 100 years of commercial flights