2015 was the safest year in aviation with 16 casualties 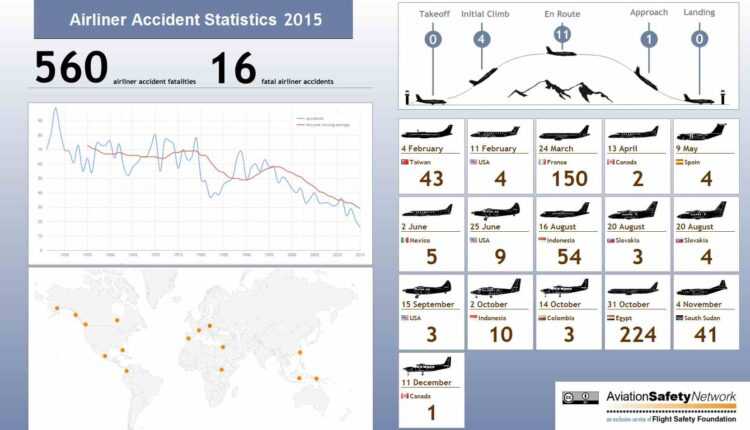 2015 was the safest year in aviation with 16 casualties

On 1 January 2016, Aviation Safety Network presented preliminary statistics on 2015 regarding aviation accidents. Although some serious aviation accidents were recorded, 2015 was the safest year in aviation with 16 casualties and 5 after the number of deceased.

Last year they were recorded 16 aviation accidents with victims, and after them 560 people lost their lives. Accidents involving airplanes with a capacity of over 14 seats were taken into account. Considering that in 2015 over 34 millions of flights were recorded, it turns out that an accident with victims occurred at 4 857 000 flights. Out of the total number of accidents involving victims, only 7 were produced on commercial passenger flights.

The worst accident was recorded on 31 October 2015. An aircraft Airbus A321 under Metrojet colors collapsed in the Sinai desert and resulted in the death of 224 people. The investigation is ongoing. According to current information, it was about detonating an explosive device.

The second worst accident was recorded on 25 March 2015, in France. An aircraft Airbus A320 under Germanwings colors collapsed in the mountains. The investigation is ongoing. According to the information, at the base was a suicide act of the pilot.

Let's not forget the accident in 4 February 2015, when an ATR 72-600 aircraft Transasia Airways crashed shortly after takeoff, which led to the death of 43 people.

According to statistics, 4 accidents occurred in the ascension phase, 11 at the cruise level and 1 accident in the descent process.