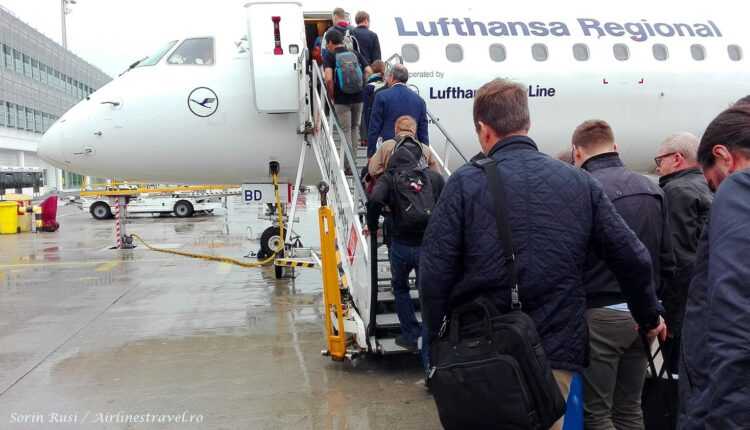 From October 29 2017, Lufthansa will open 2 new routes to Romania. Will operate daily flights on the routes Timisoara - Frankfurt and Cluj-Napoca - Frankfurt!

In its 50th year in Romania, Lufthansa will add two new routes to its flight schedule. From October 29, 2017, Lufthansa will have daily flights on the routes Timisoara - Frankfurt and Cluj - Frankfurt. Both cities are already connected to Munich.

These new flights will be operated by Lufthansa CityLine, a subsidiary of Lufthansa. Aircraft of the type will be used Embraer E190, which have 100 seats in 2 classes: Business and Economy.

With a single transfer to Frankfurt, customers in Romania can choose from 174 connections with 71 countries and choose to fly Long-haul with Airbus A380, A350 and Boeing 747-8 aircraft.

"This year, Lufthansa increases the number of connections with Germany on 7 routes and celebrates, on 25 August, 50 of successful years in Romania," he said Antonio Tassone, General Manager Sales Romania at Lufthansa Group.

“Timisoara and Cluj-Napoca will be directly connected to our largest hubs, passengers in these cities thus having access to over 200 from destinations around the world and being able to enjoy a new long-haul experience with our new Airbus A380 and A350 aircraft as well as the Boeing 747-8.

By expanding and investing this year, Lufthansa demonstrates its dedication to Romania, a country with a solid and continuous development and many opportunities for the business environment.

Thus, through our premium products and services, such as personalized digital products or broadband internet access, business passengers and holiday goers will also have more connections to Germany and other destinations around the world, ” added Antonio Tassone.

Through these 28 new weekly flights, Lufthansa Group consolidates its leading position in Romania. Lufthansa, Austrian Airlines and SWISS thus arrive at 164 for weekly direct departures to its hubs in Frankfurt, Munich, Vienna and Zurich.

Frankfurt - Germany's most cosmopolitan city - has a rich culture and history. With a population of almost 5.5 million inhabitants, the Frankfurt Rin-Main metropolitan area is one of the most important European economic centers and a popular tourist destination.

The city offers a wide range of attractions and sights, as well as internationally renowned ballet, opera, theater and art exhibitions.

Although it is the fifth largest city in Germany, Frankfurt is the main financial center of the country. The German Central Bank is headquartered in Frankfurt, as is the European Central Bank, which manages the EURO.