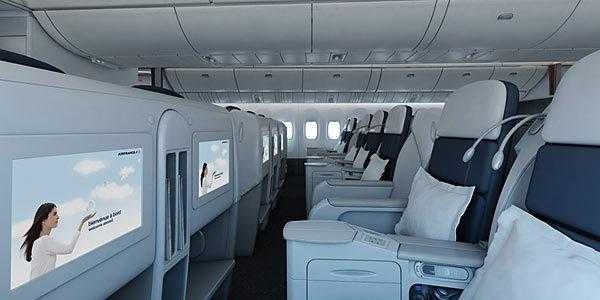 By Sorin Rusi On NO ONE. , NEVER
1 262
Share FacebookTwitterPinterestLinkedinWhatsApp
Delayed plane? Flight canceled? >>Claim compensation now<< for delayed or canceled flight. You can be entitled to up to € 600.

Air France launches Best & Beyond project and announces the first measures for the renewal and development of products and services dedicated to long-haul flights. As part of this project, Air France will invest 500 millions of euros in changing the seats in the four comfort classes: Economy, Premium Economy, Business and Premiere and improving on-board and ground services.

Internationally, in the year 2012, Air France carried on its long-haul routes over 15 millions of passengers, generating approximately 2 / 3 of the company's revenues. Of the total seats available on intercontinental flights departing from Europe, 13% are offered by Air France-KLM. Under these conditions, the company decided at the beginning of the year 2013 to launch a three-year investment project, which will exclusively focus on passenger services and comfort on long-haul routes.

The first changes will already be seen from September 2013 when the company will introduce the new Economy class seats, with more legroom and consequently increased passenger comfort, but also a new flight entertainment system. Also by the end of the year 2013, the company aims to increase the number of personnel involved in long-courier activities to approximately 19.000 people.