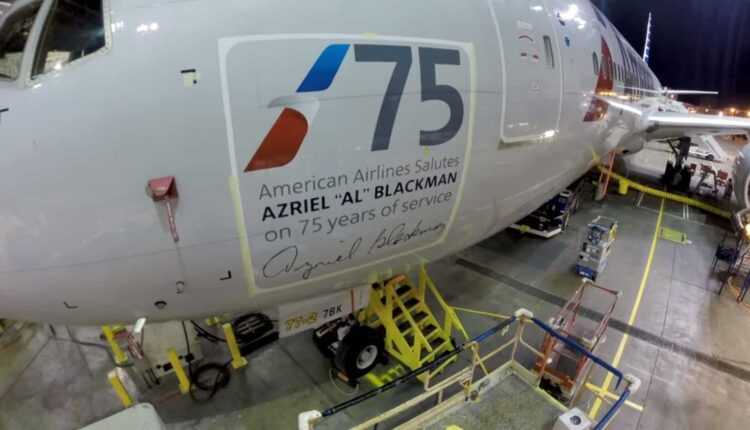 18 July 2017 is the date when technician Azriel "Al" Blackman joined GUINNESS WORLD RECORDS for his longest career as an aircraft mechanic.

At the same time, American Airlines celebrated the moment by customizing a Boeing 777-200 aircraft in honor of his technical teammate. What could be more beautiful?

At the age of 16, Azriel "Al" Blackman graduated from Manhattan Aviation High School and worked at American Airlines (American Export Airlines at that time) as an apprentice at Sheet Metal Shop for 50 cents per hour.

During the 75 years spent with American Airlines, Blackman worked on some of the most fascinating aircraft, from 1940 models to modern Boeing 777s today. At 91 years old, although the program starts at 5 in the morning, Blackman arrives at the hangar just before 3 time I have most days.

Perhaps not surprisingly, his passion for the profession motivates Blackman to move on: "When you like what you do, you don't feel like you're working." "I am honored to be here, I am proud to be a mechanic. I'm proud to be part of the American Airlines team, "Blackman said. We should learn a lot from this man full of passion and devotion.

25 years ago, when celebrating 50 years of activity as an aircraft mechanic, Azriel "Al" Blackman received the FAA title of "Charles Taylor Master Mechanic Award". This award is given in 2 conditions: 50 years of experience as an accredited aircraft maintenance mechanic or FAA certified for at least 30 years as a troubleshooter.

[RYANAIR offer] Prices from 2.99 EURO / segment for flights from Oradea