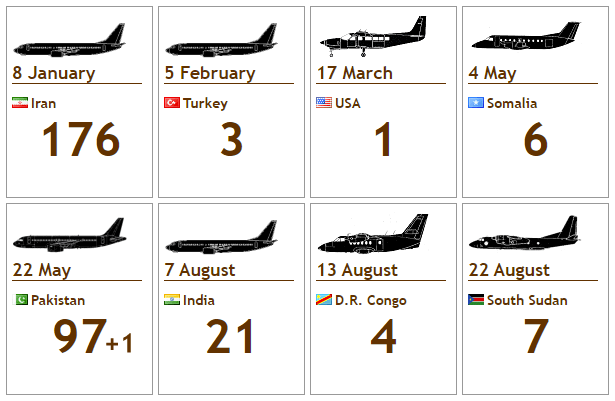 The Aviation Safety Network has published its 2020 crash report. According to it, 2020 crashes were reported in 8, resulting in the deaths of 314 people.

It should be mentioned that the Aviation Safety Network report only covers accidents involving civil, passenger and cargo commercial aircraft, which have been approved to carry at least 14 passengers.

According to the Aviation Safety Network, 2020 was the year with the fewest plane crashes resulting in casualties in aviation history. Due to the COVID-19 pandemic, the number of commercial flights registered in 2020 a decreased by 42% compared to 2019.

According to ASN estimates, a number of flights were recorded in 2020 similar to 1999. If we compare between 1999 and 2020, we can see significant progress on flight safety. In 1999, no less than 43 accidents with victims were recorded.

A small plane went off the runway and crashed into a ravine at Diamantina Airport, Brazil