Alitalia aircraft will continue to fly, but until then? 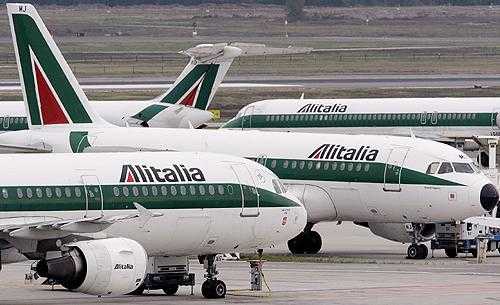 Alitalia planes will continue to fly, but until then?

By Sorin Rusi On NEVER Oct , NEVER
0 293
Share FacebookTwitterPinterestLinkedinWhatsApp
Delayed plane? Flight canceled? >>Claim compensation now<<for delayed or canceled flight. You can be entitled to up to € 600.

Alitalia, Italy's national airline, is going through moments not exactly happy. It was one step away from stopping its activity due to 30 million debts to the fuel supplier. ENI has announced that it will stop fueling if Alitalia does not prove it has a plan for recovery and continuation of activity. Fortunately, the money has been found, the debts have probably been paid, and Alitalia will continue to fly, but it is not known until then.

In the last 5 years, Alitalia has lost about 700 000 EUR per day and no longer profits from 2002. Alitalia was on the verge of bankruptcy through 2008 and was rescued by a group of Italian shareholders. At that time, Berlusconi refused to sell the majority package to Air France-KLM and chose to keep the company in the state's yard. It seems he wasn't too inspired. After 10 years of losses and wrong strategies, the authorities decided to sit down at the negotiating table to make a clearer decision.

For starters, the main shareholders, banks and Italian authorities found EUR 500 million, the minimum amount necessary for Alitalia aircraft not to stay on the ground this weekend. The Air France-KLM Group approved the capital increase with EUR 300 million (75 million from Poste Italiane, 75 million from Air France-KLM and 150 million from the rest of the shareholders) and the 200 million credit line from the banks Intesa Sanpaolo (ISP.MI) and Unicredit (CRDI.MI). According to some analysts, this amount will be spent quickly, but it will be enough to keep Alitalia in the air as long as negotiations between the shareholders and the Italian authorities are carried out.

On October 14, Alitalia shareholders will meet to discuss the situation of the airline. Air France-KLM Group, which owns 25% of the shares, is still reserved in making decisions regarding the Italian company. Air France-KLM may invest more in Alitalia, but wants to do so in the style of the group and impose draconian terms. AF-KLM wants freedom of decision, but without the political intervention of the government and without other shareholders who can oppose these austerity measures.

We are looking forward to meeting tomorrow and we are curious what decisions will be made. I expect Air France-KLM to buy yet another 25% of the shares and take little care in reorganizing Alitalia. This will involve mass layoffs, fleet and operational network overhaul.