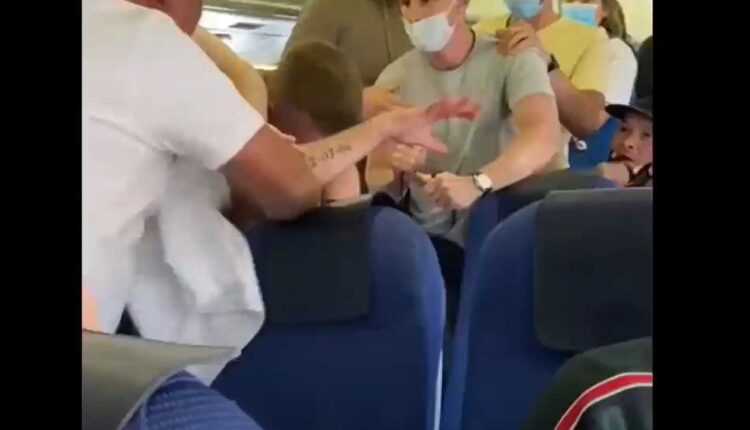 Beating on a KLM plane because a passenger was not wearing a mask (Video).

A few days ago, 2 passengers of British origin were arrested after causing a scandal on the plane. Specifically, the 2 passengers intoxicated by alcohol (2 liters of Vodka) refused to wear a mask. This bothered the other passengers, and it wasn't long before the fight.

It all happened on a flight Amsterdam - Ibiza of the airline KLM. Witnesses say one of them even got to his feet and walked down the hall without a mask. That made the other passengers angry.

Crew members intervened, asking the unmasked passenger to return to his seat and comply with the travel conditions. This bothered the 2 recalcitrant passengers, all degenerating into a general beating. One of the two thugs was beaten by passengers.

Eventually, the two recalcitrant passengers were immobilized and handed over to the Spanish police when they landed in Ibiza. KLM also mentioned in a statement that another passenger, from another flight, was fined 2 EURO for refusing to wear a mask.

Do you know what's more interesting? That it all started with the fact that the passenger was not wearing a mask, but in the filming it can be seen that many were not wearing the mask correctly.

Yellow list of countries with high epidemiological risk issued by INSP Romania on August 2, 2020. Russia and Serbia, on the green!