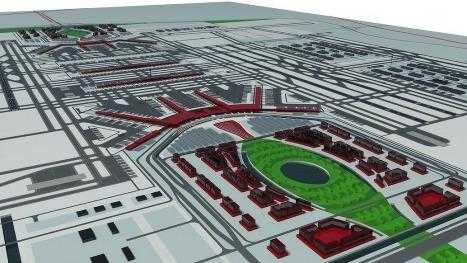 According to the new information, Beijing Daxing International Airport will have 8 runways dedicated to commercial traffic and one reserved for the army, will occupy 2680 hectares and will have an area of ​​55 square kilometers - slightly larger than Bermuda. It will be about 45 kilometers from the political center of Beijing. The airport will be connected to the Chinese capital by a high-speed train line. To begin with, it will carry 130 million passengers, and by 2020 will reach a capacity of 200 million passengers.

The new airport will have a SkyTeam hub from which it will operate China Southern, Asia's largest operator, and China Eastern. Air China, a member of the Star Alliance airline, will remain at Beijing Capital International Airport.

Theoretically, the Chinese started building this airport and plan to inaugurate it at the end of 2017. Through 2010,2011 news announced the airport for 2015. I don't even know what to believe. It remains to see how things will develop, the rumors and we will return with information.

Until the official photos with the mega-airport, I leave you to watch some images with the model designed by NACO, the Dutch company that won the project for the construction of this airport, which was valued at several billion dollars.

200 millions of passengers a year traffic through an airport, incredible figure!

When is the best time to book a flight ticket?