By Sorin Rusi Last updated NEVER Oct , NEVER
1 690
Share FacebookTwitterPinterestLinkedinWhatsApp
Delayed plane? Flight canceled? >>Claim compensation now<< for delayed or canceled flight. You can be entitled to up to € 600.

It is normal that base in Bucharest to be the largest in the Blue Air network, but the low-cost air operator cannot neglect the base in Bacău. Rumors say that the "marriage" between Bacău airport and Blue Air is not as it was at the beginning, but the air carrier's officials have denied this and announced new routes for the 2016 summer schedule.

The history of Blue Air in Bacău began in the winter season 2006-2007, and the first flights were operated on the route Bacău - Rome. After about 10 years, in the summer season 2016, from Bacău you can fly to: Bologna, Brussels, Catania, Dublin, Liverpool, London, Madrid, Milan (Bergamo), Paris, Rome, Stuttgart, Turin (Caselle). For the new routes, Madrid and Stuttgart, we will return with the operational program.

Bacău - Stuttgart from 2 June to 2016, on Thursdays and Sundays: 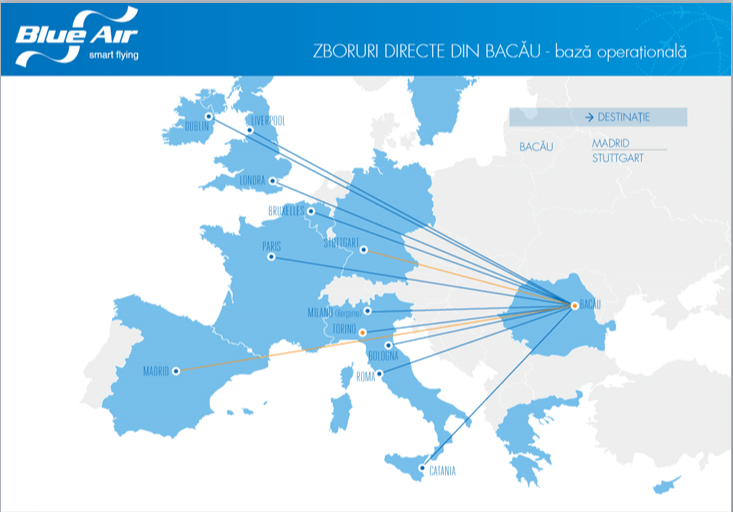 The number of flights on routes will increase:

It may seem strange that Blue Air has two bases so close to Moldova, the one from Iasi and the one from Bacau, but they complement each other through the flight schedule and so they can better serve the eastern part of Romania.