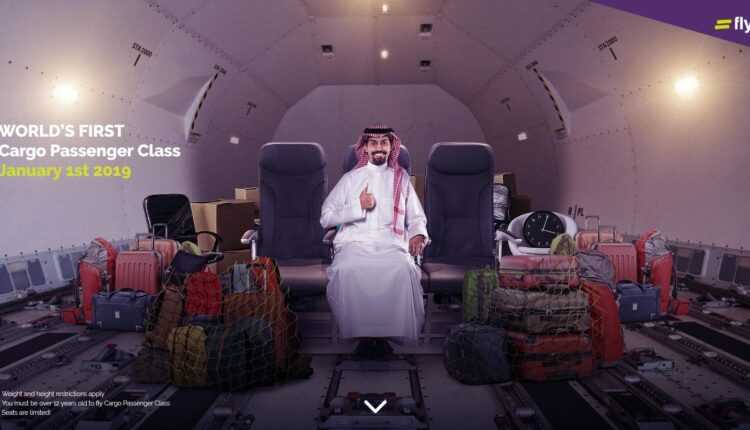 Flyadeal from Saudi Arabia has announced a new class, perhaps unique in the world. It's about cargo passenger class. What would it be like to travel in freight?

This is what the people at flyadeal thought. Given that they have about 45% free in the hold of the aircraft in the fleet, they considered being able to carry passengers.

They have designed a modular chair, which can be installed according to the free space in the hold, depending on the cargo loaded and the preferences of the passengers.

It is recommended that those wishing to travel to the passenger class should have an extra blouse with luggage, food and water. But they won't have access to the toilet. Anyway, there are short flights.

They have guaranteed that they will take care that their luggage is securely anchored and that passengers can travel safely in the plane's hold.

Those who choose to travel in cargo passenger class will have priority on boarding, will have the first access to the hold baggage and will travel in the cheapest possible way.

If you've read this far, it means you've been interested in the subject. I don't know if you liked it, if it amused you or outraged you. It is sure that everything was a joke coming from flyadeal.

flyadeal is a low cost airline in Saudi Arabia. It was founded in 2016, owns 9 aircraft and flies to 6 domestic destinations. It is based in Jeddah. flyadeal is a subsidiary of SAUDIA.

We liked the message through which they announced the joke: fly where you need to and take advantage of cheap flights. Just make sure you book your ticket early, travel smart and pay only what you need, including meals, luggage and place.

Has a Boeing 737-800 Aeromexico muzzle been damaged by drone or implosion?

# COMPETITION: Sign up for a city break in Munich