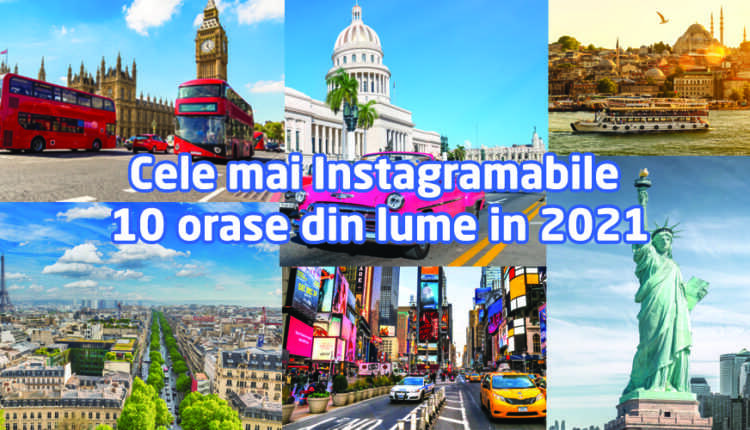 The 10 Most Instagramable Cities in the World in 2021 (video)

After a long wait, you can start rebuilding your travel plans. Over the past year and a half, Instagram has provided a digital escape as well as inspiration for when you can finally travel on a well-deserved vacation.

How EU Covid digital certificate " is launched officially in several countries, and the vaccine is already done, I hope to be able to travel more this year because I have many destinations on bucketlist. If I can't visit other continents, I'll just stay on the European side. We also have the old continent many beautiful destinations which we can visit. In addition to the beautiful Greek islands - most famous and award-winning beaches, Europe has more 11 beautiful islands which we can visit.

The most Instagramable cities in the world

Travel site Big 7 Traveanalyzed the amount of hashtags used for the various locations used in the Instagram app to determine the top destinations that travelers photograph and share with other users. They also questioned readers and their editorial team to establish a ranking of the 10 most Instagramable cities in the world in 2021. In other words, below is a list of the most mentioned cities in your Instagram posts.

Chicago is the largest city in Illinois and the third largest city in the United States, after New York and Los Angeles. The city is an important financial and industrial center of North America, being also known for its ethnic diversity, but also for its importance in the American transportation network, having the second largest airport in the United States in terms of number of passengers, Chicago O'Hare International Airport. rivaling only Atlanta International Airport.

It may also be known as The Second City, but Chicago ranks only 10th among the most Instagrammable places in the world. There are plenty of things for tourists and locals alike to photograph, including huge pizzas, museums, Chicago's vintage theater and the famous Millennium Park sculpture known as "The Bean."

Westminster (Palace and Abbey) and St. Margaret's Church in London were inscribed on the UNESCO World Heritage List in 1987. According to an analysis published by Culture Trip in 2016, London is one of the top ten most modern cities in the world.

There are over 145 million photos on Instagram with the hashtag #London, which is not surprising considering the many famous attractions of the international destination, including Big Ben, London Eye, Buckingham Palace and London Bridge.

There are over 32 million #Sydney hashtags on Instagram, helping this "Down Under" reach 8th place. While it may not have as many posts as London, the city's iconic landmarks such as Opera in Sydney (which was included on the UNESCO World Heritage List in 2007) and the Harbor Bridge give it an Insta-worthy advantage.

Australia is a continent, a country and an island! It is nicknamed "Land Down Under" because it is below the equator. Australia consists of six states and two territories, but the only country in Australia is Australia! Australia is the smallest continent.

Havana, Full name Villa of San Cristóbal of Havana, is the capital of the Republic of Cuba and at the same time an independent province. It is the port city, the main commercial center of the country and the largest metropolitan area in the Caribbean. The city was founded on November 16, 1519, by the Spanish conqueror Diego Velázquez de Cuéllar. The old part of Havana has been on the UNESCO World Heritage List since 1982.

The hearts of many travelers are in Havana and we say this based on the 4 million hashtags #Cuba on Instagram. The capital of Cuba, Havana is full of classic convertible cars perfect for posing, colorful buildings with a unique architecture and a vibrant culture, which makes the city perfect for instagrammuit.

Dubai  is the largest city in the United Arab Emirates (UAE) and is located on the southeast coast of the Persian Gulf and is the residence of the Emirate of the same name.

Driven by the oil and gas industry, the economic development of the city was very rapid, requiring labor from abroad. Thus, over 80% of the population is immigrant (especially from India and Pakistan), Dubai being the city with the most foreign inhabitants.

Dubai is so full of charm and luxury that even someone with the most basic photography skills can take a stunning photo relaxing at a resort pool, taking a walk through Dubai Miracle Garden or when shopping through malls and bazaars.

Istanbul it is the largest urban concentration in Turkey and the only megalopolis in the world spread over two continents. In the old Romanian texts, the city was called Țarigrad, Stanbul, Stambul, High Gate or Gate. Officially, the former capital received the Turkish name of Istanbul on March 28, 1930, until then retaining internationally the ancient and traditional name of Constantinople.

The city is a megalopolis, as well as the main financial, commercial and cultural center of Turkey. It stretches over 27 districts out of the 39 of the province of the same name, being one of the largest metropolises in the world. It is the economic capital of Turkey and the prefecture of the province of the same name. The European part is located in the historical region of Thrace and the Asian part in Anatolia. The city has been inscribed on the UNESCO World Heritage List since 1985. Similar to Medieval Constantinople, today in Istanbul we find the largest human settlement in Europe.

Istanbul is where Europe and Asia meet, creating a unique combination of culture, food, architecture and more. The Blue Mosque, the Grand Bazaar and more offer opportunities for detailed close-ups as well as majestic photographs of the landscape.

The city New York is the most populous city in the United States, its metropolitan area being one of the largest urban areas in the world. It is located in New York State, being the first capital city of the state and the place of appointment of George Washington as the first president of the United States. It is one of the world's major centers of trade and finance, being considered one of the most important cities in the world due to its global influence. The city is also an important center of foreign affairs, hosting the headquarters of the United Nations (UN).

"The great apple" is also big on Instagram, with almost 30 million posts tagged with #NewYorkCity and 100 million tagged with #NewYork. Those wishing to photograph special places can do so in Times Square, along the Brooklyn Bridge, on the top floor of the Empire State Building. However, the city has many other wonderful places to offer and pose, places that put NY in 4th place.

Paris is the capital and largest city of France. The city, which is crossed by the river Seine, is located in the middle of the Île-de-France region (also known as the Paris region). The city has been largely unchanged since 1860, being one of the most populous European metropolitan areas.

Paris is today one of the largest economic and cultural centers in the world. It hosts the headquarters of several international organizations, such as: UNESCO, the Organization for Economic Co-operation and Development, the International Chamber of Commerce or the informal Club Paris. Paris is considered one of the greenest and most livable cities in Europe, but also one of the most expensive.

Light is the key to capturing the perfect photo, and the City of Lights has lots of perfect attractions and scenery to be instagrammed, from the Eiffel Tower to the Arc de Triomphe to the Sacré-Coeur. These, together with French cuisine, unique style, perfumes, croissants, fashion and art, rank it in 3rd place. the 10 most Instagramable cities in the world in 2021.

Philippines is an island country in Southeast Asia, in the Pacific Ocean, comprising the archipelago of the same name. The Philippines is divided into 81 provinces, which are grouped into 17 regions and has as main cities Manila, which is the capital of the island, and Quezon City, which is the largest city. The country consists of 7641 islands, the largest being Luzon, Visayas and Mindanao. The relief is mountainous and of volcanic origin, the country being in a region with active seismicity and intense volcanism, being included in the "Pacific Circle of Fire" - the largest and most active volcanic area on Earth, concentrating 62% of the currently active volcanoes (over 350 of the 600 active volcanoes).

The stunning natural beauty and colorful and vibrant cities of the Philippines have given the island a 2nd place. Gourmets, history buffs, sun, sea and beach lovers will all find something on the island to suit their tastes - and to take a great photo - on a trip to this exotic island.

Tokyo, officially the Tokyo Metropolis, is the capital of Japan and one of the 47 prefectures of the country. It is the most populous metropolitan area in the world and is considered one of the most modern cities in the world. Here is the seat of the Government of Japan, since 1603, and the residence of the Emperor. It officially became the capital when Emperor Meiji moved his residence to the city of the former capital Kyoto in 1868. The metropolis of Tokyo was formed in 1943 by the union of the former Prefecture of Tokyo with the City of Tokyo. The city is home to 51 Fortune Global 500 companies, more than any other city in the world.

Tokyo ranks first in the top the 10 most Instagramable cities in the world in 2021, with over 53 million hashtags #Tokyo. The city has many distinct attractions, including Shinto shrines, cherry blossoms, neon lights in the Harajuku neighborhood or Shibuya Crossing.

If you find other cities that you think would be in this top, we are waiting for your pictures on our page Instagram or you can put #AirlinesTravel on the pictures you want to share with us.

That being said, we wish you a summer full of travel, fun, and lots of pictures :)!

OFFICIAL: Romania updated the red, yellow, green list. The Netherlands, Sweden, Latvia are on the yellow list, and Croatia, Cyprus, Turkey, Switzerland are on the green list!