Who will provide cleaning at Henri Coanda Airport, Bucharest?

On 31 January 2018, the contract between Romprest and Bucharest Airports National Company expired. Who will ensure the cleanliness of Henri Coandă Airport in the coming days?

On 31 January 2018, the contract between the National Company "Bucharest Airports" and Romprest has expired. Thus ends a monopoly of 17 years of Romprest on this contract. At least we hope this will happen.

The contract with Romprest has expired

Through 2013, a report by the Court of Auditors revealed the luxury cleanliness of the airport. Henri Coanda International Airport (Otopeni) paid at that time almost 3.000 dollars per month for every square meter cleaned by the Romprest Service company, which is about 100 dollars / day. And the price went up to 2017, when CNAB paid huge amounts for cleaning. Despite the exaggerated price, the cleaning left it to be desired.

To better understand the current situation and upon request of AirlinesTravel.ro, we received the following information.

Bucharest National Airports Company organized, on January, 29 January, 2018, the tender to ensure cleanliness at Henri Coandă Airport. The technical commission analyzed the offers submitted by the companies specialized in the field, following that the winning company fulfills its contractual services to high quality standards, to the benefit of the passengers.

Given that the cleaning and sanitation services at the airport have, over time, been criticized by passengers, becoming one of the vulnerabilities of Henri Coandă Airport, the management of the National Company Bucharest Airports decided that the new contracts should be governed according to efficiency rules and to establish a series of strict criteria for the verification of cleaning activities, which the winning company must adhere to.

In order to make the expenses more efficient and to comply with the quality standards offered to passengers, starting from Thursday, February 1, until the entry into force of the contract, a part of the employees of the Bucharest Airports National Company will volunteer, for a short period, in a contingency project in the field of airport cleaning services, which until now have been outsourced.

This strategy aims to ensure the cleaning and sanitation services of the Bucharest Airports National Company with its own resources, so as to establish the internal performance criteria of the CNAB in this field.

Bucharest National Airports Company will continue to take all necessary measures to provide passengers with the highest quality services, but also for the complete safety and security of the airport operations. 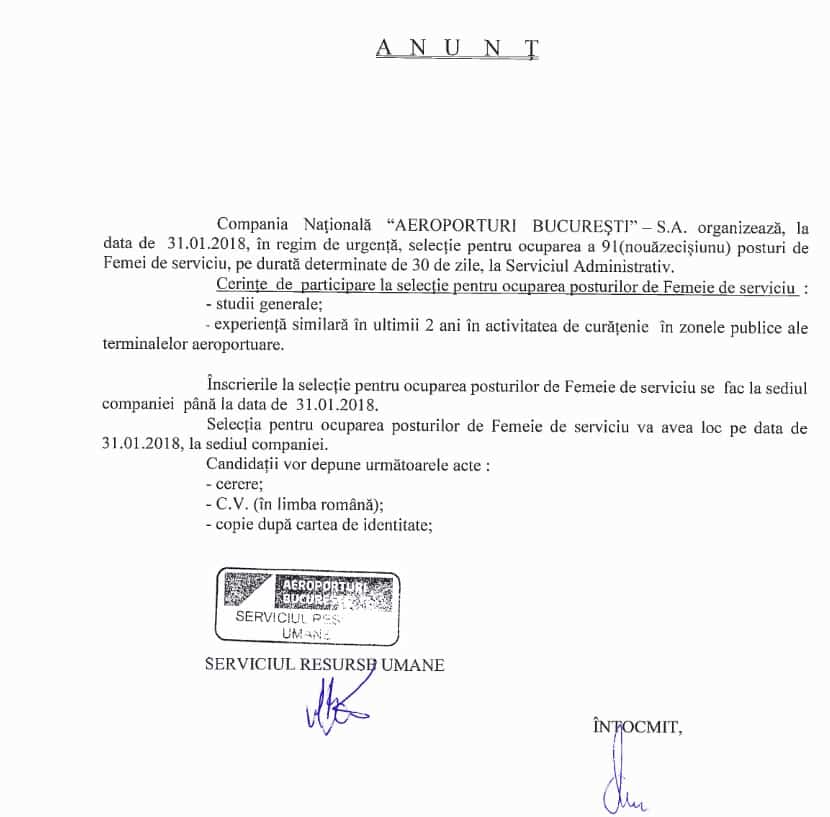 Also today, the National Airports Company of Bucharest organized in emergency regime the selection for 91 of positions of "Service women". These places would be occupied by former Romprest employees, who would otherwise be out of jobs.

We are waiting to see the new winning company, which will handle the cleaning of Henri Coandă International Airport, Bucharest!

We remind you that in 2018, Henri Coanda International Airport was transacted by over 12 million passengers. Such an airport needs premium services, considering that it is also the main airport of Romania!