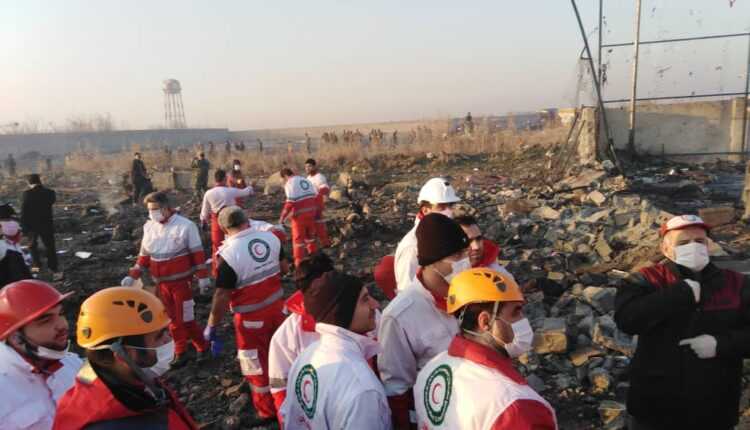 If there were any doubts about the plane crash in Iran, here the airline operator Ukraine International Airlines confirms the tragic accident.

This morning, January 8, 2020, the Boeing 737-800 UAI (UR-PSR) aircraft was to operate flight PS752, on the Tehran - Kiev route. Shortly after taking off, the aircraft disappeared from the radar screens. According to the flight report, the aircraft took off at 06:10 local time.

Spectacular images from the accident place to ...

There were 167 passengers and 9 crew members on board. We also have the preliminary list of those on board, by nationalities: • Ukrainians - 11, • Iranians - 82, • Canadians - 63, • British - 3, • Swedes - 10, • Afghans - 7. The UAI is still working on clarifying exactly of the number of passengers on board. Ukraine International Airlines will post on the company's website the final passenger list only after confirmation that they were on board the plane. Other information announces only 63 Canadians and 82 Iranians.

As we mentioned in the article announcing the unfortunate accident, the Boeing 737-800 UAI (UR-PSR) was 3.6 years old. The delivery was delivered in July 2016. The last scheduled technical review of the aircraft was made on January 6, 2020.

The survey will be conducted with the support of specialists from Ukraine, Iran, representatives of Boeing. At the moment it is premature to discuss the causes that led to the plane crash.

Below is the official statement issued by Ukraine International Airlines

Today, on January 08, 2020, the "Ukraine International Airlines" aircraft while operating flight PS752 from Tehran to Kyiv disappeared from the radars a few minutes after departure from Tehran International Airport. The aircraft departed from Tehran International Airport at 06: 10hrs. Iran local time. According to preliminary data, there were 167 passengers and 9 crew members on board. UIA representatives are currently clarifying the exact number of passengers on board. Passenger lists will be posted on the airline's website after final confirmation of their presence on board the aircraft. The airline expresses its deepest condolences to the families of the victims of the air crash and will do everything possible to support the victims' relatives. With immediate effect, UIA has decided to suspend its flights to Tehran until further notice. As at 09:30 am, UIA in close cooperation with the aviation authorities, takes all measures to determine the causes of the air accident. In parallel, the airline will be contacting the passengers' relative, providing all possible assistance in the current situation. The flight was operated on a Boeing 737-800 NG aircraft (UR-PSR registration). The aircraft was built in 2016 and delivered directly to the airline from the manufacturer. The last scheduled maintenance of the aircraft took place on 06 January, 2020.

For information on passengers

There will be a press conference

The briefing will take place for media representatives. Place: Conference Hall of Boryspil International Airport. Time: 08 January, 2020 at 10: 00hrs. Meeting place for journalists - Information Desk, Terminal D, International Flights check-in area. Investigation will be conducted with the involvement of the aviation authorities of Ukraine, Iran, representatives of the Boeing manufacturer, the airline, and the National Bureau of Air Accident Investigation of Ukraine. The airline will inform on the progress of the investigation and the causes of the tragic event as soon as they are identified.