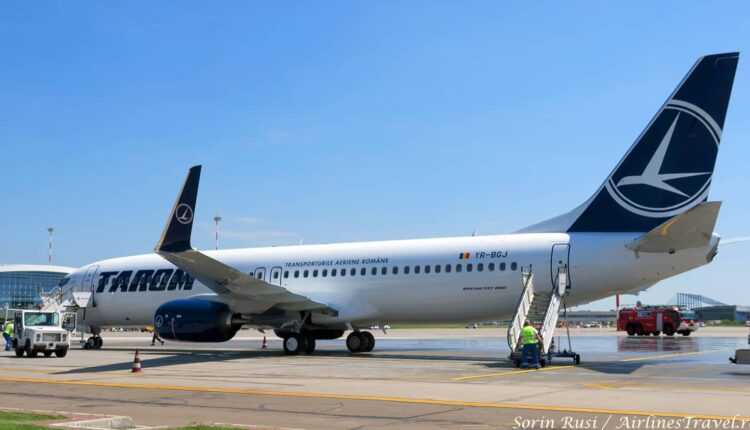 A lot of people like me have never seen such an event before. Oh, wait, at TAROM no purchase has been made for over 10 years. It was a shameful thing to retire the 2 Airbus A310 aircraft, but not yesterday's event.

After the event, many comments on what happened. Some positives, some negatives, were also harmful to TAROM or the plane. This is the case in Romania. We believe in everything and everything. Very well! We are part of a people that is proficient at all and is very good.

AirlinesTravel.ro, positioned as an aviation and travel site, connects you to everything that happens in the 2 worlds and presents the events as objective as possible. Our goal is to transmit the information correctly and real, maybe even with a small dose of subjectivisis in some cases. We do not run after breaking news, after the shock and fat news, after exclusivity.

We have often notified you when an air carrier has received new aircraft and we will continue to do so whenever there will be notable times in Romania or globally. We announced when TAROM, Blue Air, Wizz Air and other companies opened new routes to / from Romania. I also published less pleasant articles with the closure of routes, incidents, strikes, etc. Any time of aviation and travel should be treated appropriately.

As I saw the event, with good and bad. Yesterday's reception was not just a joy to receive the aircraft, it was also a turning point for TAROM. After a long period of agony, something happens in the national air carrier's yard and this gives people hope to believe in TAROM.

I congratulate them on organizing the event and because they managed to attract all their eyes on this reception. Any aircraft registered in Romania represents a joy for the local aeronautical industry. 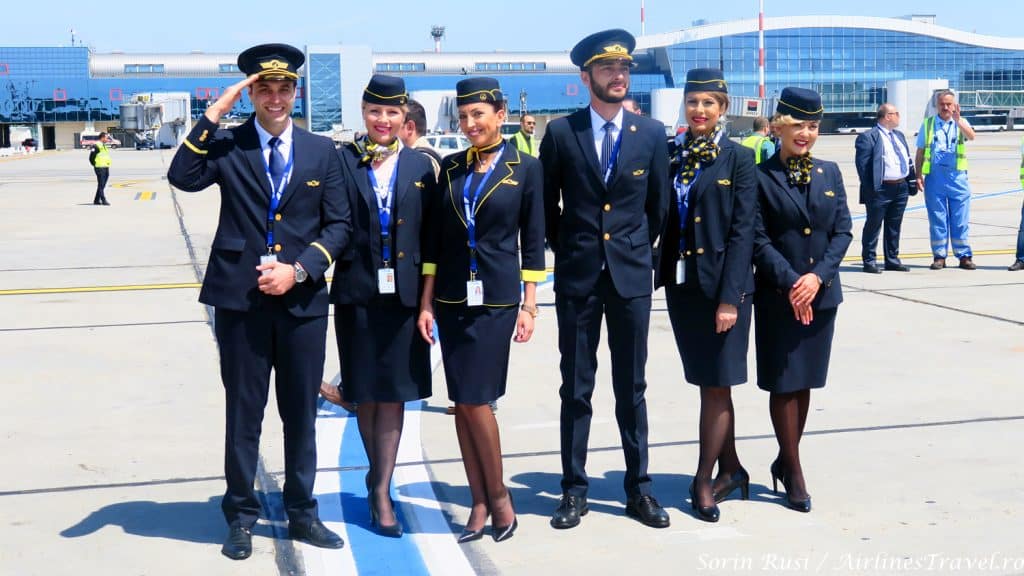 The fact that Boeing 737-800 (YR-BGJ) is a new aircraft is a major plus for the company. Over the 5 years of AirlinesTravel, I have published numerous articles on such important moments for the global aviation industry. I experienced the emotions of the first flights to the new generations of airplanes, I experienced the emotions of road opening events for many airlines around the world. Why wouldn't we do this with TAROM? Do we really have to criticize everything?

I admit that I'm a little skeptical about TAROM's development plan, but that didn't stop me from enjoying the arrival of a new plane to Bucharest. This is how we are, we are passionate about aviation and flights, more naive and we get excited quickly when we see a plane that we associate with an important event in our life, in the "life" of an airline, etc.

It was natural to witness yesterday also the greetings of the water cannons and the "baptism" of the Boeing 737-800 aircraft. This moment should not be criticized. How not to criticize the fact that he arrived in the company of 2 F-16 aircraft of the Romanian Air Force. It was a show for the fans!

I saw a lot of mischief on the plane. Boeing 737-800 Next Generation is a reliable and desirable aircraft for many companies. There are over 4500 aircraft in commercial service, and 625 is waiting for the factory gate at Renton, Washington, United States. It means that it is not such a weak plane as some people think.

Ryanair has a fleet of 737-800 aircraft only. The fact that the Irish operator is low-cost has nothing to do with the plane, but with the commercial policy. As well, Wizz Air, another large low-cost carrier, has a homogeneous fleet of Airbus A320 and A321 aircraft. Does this mean that full-service operators are no longer allowed to buy these aircraft?

The fact that the Boeing 737-800 YR-BGJ came equipped in an Economy class with 189 seats does not have to scare us. TAROM does not turn into low cost. For those who do not know, TAROM has already had 3 737-800 aircraft in the fleet, all being equipped in a similar configuration and nobody panicked.

As for the lease and the hasty way of purchase, I can not pronounce and I am not passionate about this aspect. But it is certain that TAROM needed additional 2 aircraft for the 2017 summer season. Following the withdrawal of the 2 A310, TAROM lost approximately 15-20% of its transport capacity.

When the charter season hits the door, you have to do something. If TAROM had not acquired these aircraft, it would have had to reconfigure the operational network and then it would have abandoned routes. There would certainly have been critical voices to the carrier. But it should be known that they are air carriers, state or private, which at certain times of the year give up the usual routes and seek to operate as many charters. We make beautiful and safe money from charter flights.

Turning the event into an election campaign

In all the madness of yesterday, I did not appreciate the presence of the alliance of politicians. There would be nothing to comment on if Minister Răzvan Cuc came from the Ministry of Transport. TAROM is in the field of God. He applauds, all good and beautiful. That would have been normal.

But as in Romania the notion of "normal" has another connotation, at yesterday's event came dozens of politicians and we witnessed painful statements. I do not like the things done with political character and which many politicians cling to. It's not their merit! There was also a need for priests for the picture of the perfect pain! 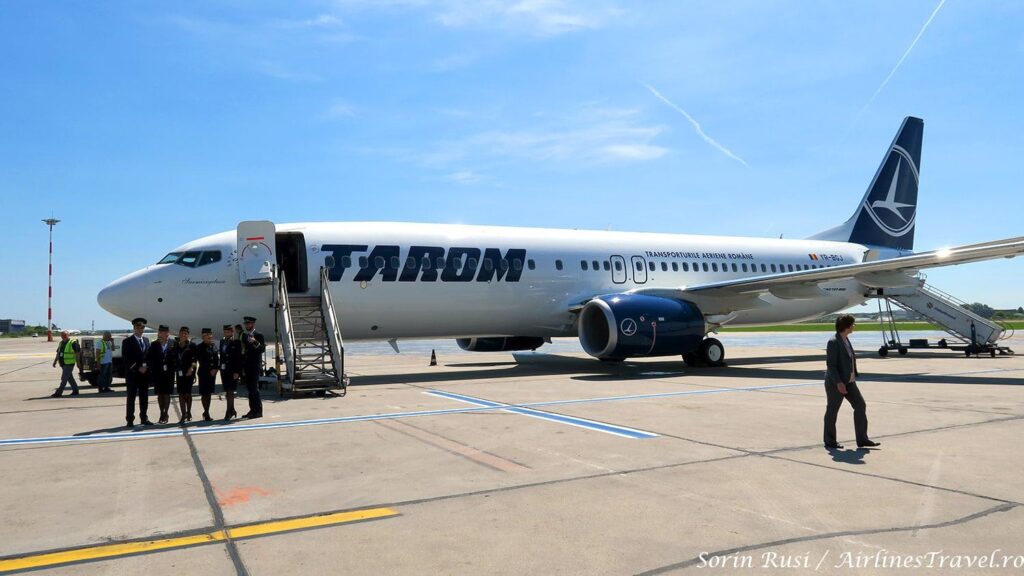 In 2016, after the retirement of the two Airbus A310 aircraft, TAROM began searching for 2 replacement aircraft. A few criteria were set and the facts were passed. To buy new aircraft, TAROM had to sit in a long queue. Orders for aircraft are normally placed well in advance.

As 2017 approached and caught them in the summer, TAROM searched the portfolio of leasing companies. He found these 2 aircraft, which normally had to reach Pegasus Airlines. But the low-cost air carrier in Turkey has given up on them because it has changed its development strategy and is focusing on an Airbus fleet. This is aviation. Looking to adapt to the market!

YR-BGJ was already assembled and painted in Pegasus livery when TAROM signed the lease. It also had the interior fitted to the Pegasus configuration. It followed the process of transformation, repainting and here on May 24 2017 landed in Bucharest.

This summer, we believe that TAROM will keep the 189 configuration of seats. The aircraft will fly on crowded routes, which gives it an added ability to transport. A310 could carry up to 209 passengers (20 to Business Class and 189 to Economy seats). If the operational plans change, the aircraft may be reconfigured.

The current configuration comes with a minus for cabin attendants. There are not enough ovens to heat the menus in a reasonable amount of time. More effort will be made to successfully serve them during the flight. Perhaps for these reasons, the new 737-800 will operate flights to destinations such as Madrid, Alicante, Valencia, Tel Aviv and Amsterdam, with an average flight of 3 hours. On domestic flights to Cluj and Timisoara it would not be excluded to serve only cold menus. It is difficult to serve hot meals for 189 passengers in such a short time.

About the seats in the plane, I have a good opinion. They are new, they are thin, light and comfortable (as much as possible). They are fixed, so you can not turn your back on the back. Standing up is not enough to feel cramped. At my 1.8 meters, I feel comfortable in such a chair. I do not know the opinion of those over 1.9 meters or who are overweight. Maybe you tell us in the comments!

The second 737-800 (YR-BGK) will arrive in June. At the time of signing the contract, he was just leaving the assembly line. He needs test flights, checks etc, and will soon fly to Bucharest. From our information, the second 737-800 will be painted in the TAROM hangar.

That being said, do not forget to enjoy the little things and what you consider to be lived to the fullest.