On 1 August 2008, Emirates operated the first flight with Airbus A380, on the route Dubai-New York. The aircraft landed at JFK - John F. Kennedy International Airport, with 468 passengers on board and marking the first arrival of an A380 in the United States, on a commercial flight. The distance between Dubai and New York, 11 km, was covered in about 023 hours and 13 minutes, being also the longest route operated by an Emirates A30. The shortest route honored with the Emirates A380 is Hong Kong - Bangkok, 380 kilometers in 1900 hours and 2 minutes. 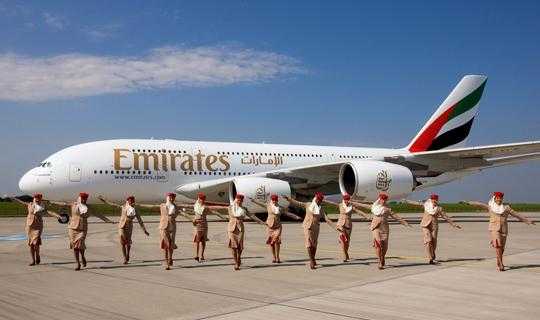 At 1 August 2013, Emirates celebrated five years after the first flight with A380. During this time, 7000 flight attendants and 650 pilots made sure that over 18 millions of passengers enjoyed the comfort and services offered on board the 35 Emirates A380 aircraft.

In five years of activity, A380 Emirates aircraft have flown over 265 millions of kilometers, during which time they were served over 35 millions of meals over 20.000 flights. A380 Emirates has landed on 37 from airports, either for regular flights or in special situations.

We recall that Emirates has opened Concourse A, a terminal dedicated only to A380 aircraft. It was inaugurated in January 2013 at Dubai International Airport.