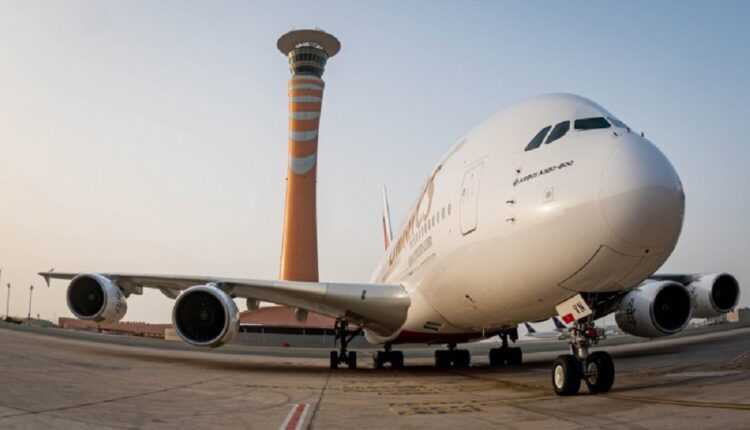 Emirates flew with Airbus A380 to King Abdulaziz International Airport (KAIA) in Jeddah, becoming the first airline to fly a super-jumbo to the latest aviation landmark in the Kingdom of Saudi Arabia. Flight EK2803 landed in Jeddah on March 29, 2021, at 18:10, and was greeted with a salute of water cannons.

In fact, the correct news is that the Airbus A380 Emirates was the first super-jumbo to park at the new terminal of King Abdulaziz International Airport (KAIA) in Jeddah. To mark the moment, Emirates operated flight EK2803 with one of the newest A380 aircraft, indicative A6-EVN, which comes equipped with the new Premium Economy class.

Passengers choosing to travel with the A380 can benefit from the new ground facilities and services, including easy boarding and disembarking from two-tier aerobridges.

Terminal 1 KAIA is one of the largest terminals in the Kingdom of Saudi Arabia and has the capacity to handle 30 million passengers per year, combining both domestic and international flights. It can accommodate up to 70 aircraft simultaneously, including the Airbus A380.

One of the largest airport infrastructure projects in Saudi Arabia, the new KAIA Terminal 1 supports the significant investments that the Kingdom has made in aviation, as part of KSA Vision 2030, to diversify its economy, create trade links and broader tourism and transform its place as a global hub connecting Asia, Europe and Africa.

KAIA is also proud of the highest air traffic control tower in the world, measuring 136 meters. Helping to serve as a gateway for Hajj and Umrah pilgrims, Terminal 1 is connected to the Haramain high-speed railway, and passengers can travel without problems to Medina and Mecca.

Italy could impose a quarantine for all EU travelers