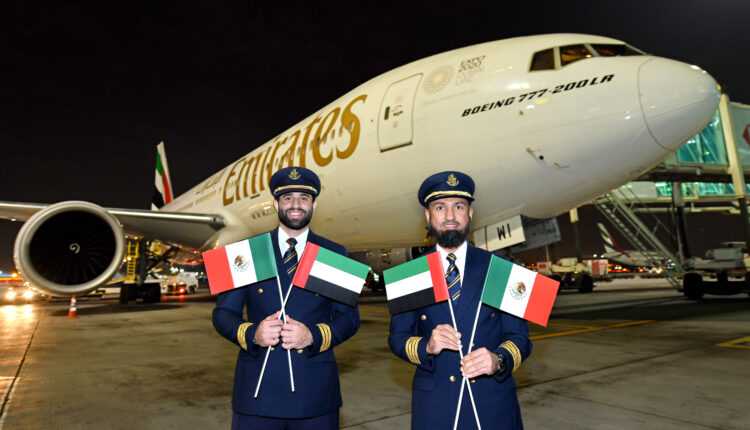 Being the inaugural flight of the Dubai - Mexico City route, it is clear that on board were journalists, VIP personalities and officials from the Emirates airline, representatives from the United Arab Emirates, but also senior officials from Mexico, such as the ambassador. Mexico in Dubai.

Emirates will fly with Airbus A380 to Cairo (special flight)

In the summer season, Emirates flies with A380 to Amman and…

The shortest A380 flight in the world, on the Dubai route -…

This is a very important moment for Emirates. After a long period of negotiations and after a few hiccups and delays, here is the first EK255 flight successfully honored between Dubai and Mexico City.

The aircraft used was of the Boeing 777-200LR type, indicative of A6-EWI. It has recently been reconfigured into comfortable 2 classes, with 38 seats in Business and 264 seats in Economy. The plane is about 11 years old. The Boeing 777-200LR may have a maximum range of approximately 15 000 kilometers, but it is very important for the configuration and routes operated. Weather conditions play an important role in the equation of a flight.

Flights from Dubai to Mexico City are approximately 3 hours far from Barcelona.

According to the statement made by Rodrigo Vasquez, the director general of the Civil Aviation Authority of Mexico, Emirates is the 43 country with international flights to Mexico. Aeromexico has repeatedly tried to block the entry of the United Arab Emirates carrier into the Mexican market, but without success. Emirates will fly daily on the Dubai - Mexico City route via Barcelona.