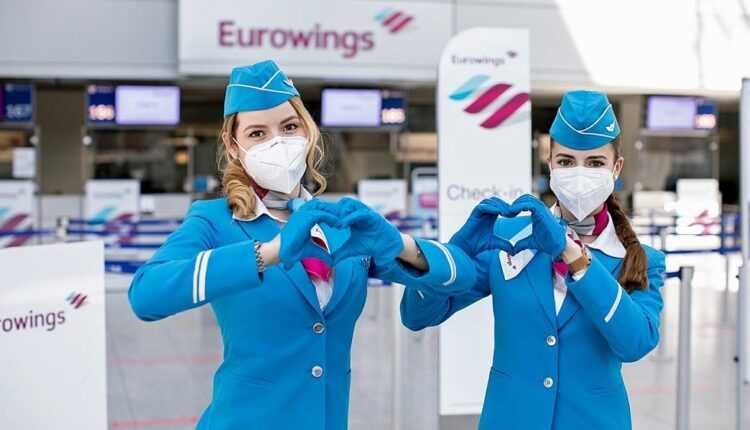 Eurowings flies from Düsseldorf to over 70 destinations

Summer vacation in North Rhine-Westphalia, Germany's most populous state, will officially begin on July 9. In recent weeks, Eurowings and its employees have worked hard with their partners to prepare for the start of the most wonderful time of the year. After the pandemic, the desire to travel is greater this summer than it has been for a long time.

With the increase in the vaccination rate, the decrease in the number of infections and the lifting of travel restrictions, the demand for flights has increased significantly. Tourist destinations are requested - above all - to Majorca, Greece, Canary Islands and Croatia. Eurowings responded to this by successively expanding its flight schedule and increasing the number of flights offered only in Düsseldorf, the largest Eurowings hub, by another 40% during the holidays.

From Düsseldorf, Eurowings offers passengers the widest range of flights of all airlines during the summer holidays: over 70 destinations in 20 countries are scheduled, and from Cologne, the airline's aircraft will fly to 60 destinations in 18 countries. On the first holiday weekend, Eurowings expects around 25.000 passengers in Düsseldorf and 13.000 in Cologne. 4.000 Eurowings flights will take place in Düsseldorf during the holidays, just under 2.000 flights to Cologne.

Eurowings flies from Düsseldorf to over 70 destinations.

With the expansion of the summer offer, the aircraft fleet is growing: while Eurowings operated only 45 aircraft in May, more than 70 Airbus aircraft will take off again to the Lufthansa subsidiary in July and August. In September, Eurowings plans to operate 80 aircraft. In the two major Eurowings locations in North Rhine-Westphalia alone, almost 40 planes will be stationed this summer: 26 planes in Düsseldorf, 13 in Cologne.

With its wide range of holiday offers, Eurowings is positioning itself as the leading holiday airline in Germany for medium and short distances for the beginning of summer 2021: Mallorca continues to be very popular with travelers and ranks first in the top of the most popular destinations. of Eurowings this summer. From Düsseldorf alone, Eurowings flies to the Balearic Islands up to ten times a day during the holidays. From Cologne, there are five daily flights to Mallorca. In total, Eurowings connects 24 airports in Germany and Austria with popular holiday destinations, with over 300 weekly flights to Mallorca.

Heraklion and Thessaloniki, Ibiza and Malaga also enjoy strong demand and are served daily. Other destinations include Sardinia, Croatia, Sicily and the smaller Greek islands. Eurowings flies several times a week to Milan, Rome or Barcelona, ​​for example. New destinations include Mykonos, Palermo, Krasnodar and Ekaterinburg in Russia and Tbilisi in Georgia.

Blue Air increases the frequency of flights between Bucharest and Milan

Cyprus has lifted restrictions on Belgium, Denmark, Monaco, the Vatican and Jordan