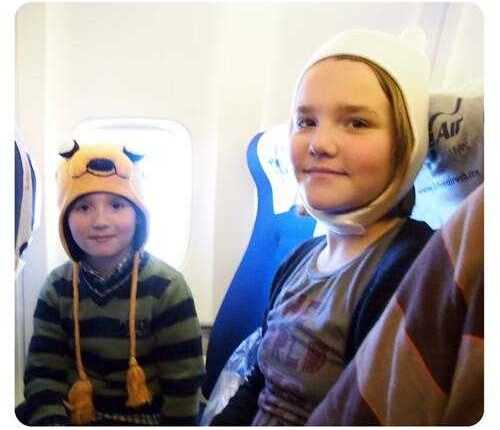 By Sorin Rusi On NEXT Feb , NEVER
0 264
Share
Delayed plane? Flight canceled? >>Claim compensation now<< for delayed or canceled flight. You can be entitled to up to € 600.

Two of the most beloved cartoon characters from Cartoon Network, Finn and Jake, the protagonists of the comedy "Let's start the adventure", "invaded" the aircraft last weekend Blue Air. The kids on board had fun and got into the skin of the wise and talkative dog Jake and the naive and brave boy Finn, in one of the actions organized to launch the new episodes of "Begin the adventure".

Also in preparation for the launch, fans can win unique "Start the Adventure" items and a Sony PSP, at the two competitions organized on www.CartoonNetwork.ro or other special prizes within the contest organized on Blue Air official Facebook page.

If you like to travel and see great places, come to Ooo Land, where the Finn boy, the wise and talkative dog Jake, the Hot Dog princess, the Emperor of the Ice and many other heroes will make you laugh. Join the official Blue Air Facebook page between February 18 and 25 and you can win a unique Finn and Jake hat!

"Let's start the adventure", the animation-phenomenon, which sparked the imagination of children, young people and adults, returned to Cartoon Network from 22 February, every Friday at 17: 00.

Heathrow Airport has recorded record number of aircraft movements in 2012