By Sorin Rusi Last updated NEVER, NEVER
0 491
Share
Delayed plane? Flight canceled? >>Claim compensation now<< for delayed or canceled flight. You can be entitled to up to € 600.

IASI - Madrid with TAROM, from June 25, 2016! TAROM is looking to develop the IAŞI base and position the aircraft Boeing 737-300 on profitable routes. Unfortunately, several attempts were disappointing. Flights to Istanbul proved to be at a loss. They also gave up the combination via Cluj, especially since Turkish Airlines announced its intention to operate the Istanbul - Cluj route.

In our opinion, the IASI base should be closed and TAROM should reposition itself as a premium airline and continue its development in Bucharest, maintaining its operating style with a central hub. 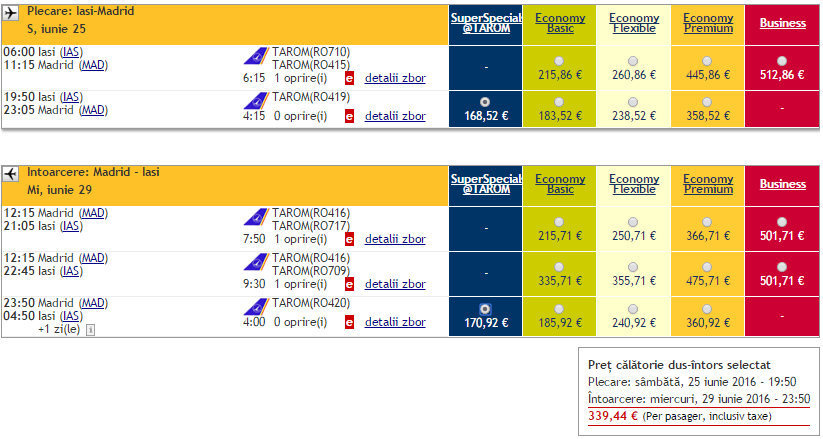 Let's hope that the IASI - Madrid route with TAROM will be a profitable one for the national air operator. It would be inaugurated on June 25, 2016. 2 flights a week will be operated, on Wednesdays and Saturdays, according to the following schedule:

The flight duration will be approximately 4 hours. The route is loaded into the system and you can book your tickets!

The schedule is not encouraging. Night flights are not to the advantage of those who want a city break in Madrid. But the numbers will show us over time whether we were right or not. At this moment, TAROM has no competition on the route IAŞI - Madrid, which gives it an advantage.

(P) Buy an ASUS ROG GX700 laptop and go on vacation to Rome, Paris or Barcelona

Ryanair has announced the first routes in Luxembourg: London and Porto