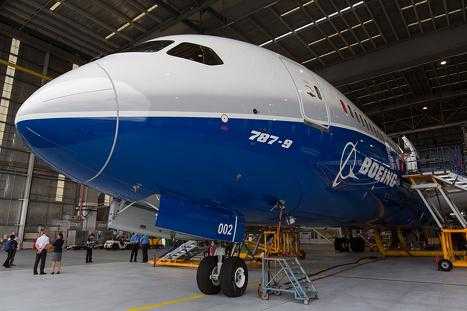 A few days ago, I announced that Boeing 787-9 Dreamliner has arrived in Auckland, New Zealand, home of the first airline to receive this type of aircraft - Air New Zealand. This was also the first long-haul flight operated by an 787-9 aircraft during the test period.

During his brief time in Auckland, Boeing organized a tour of the aircraft Boeing 787-9 (ZB002) to which the site representatives were invited Australian Business Traveler. They had the opportunity to take a few photographs with the interior of the aircraft.

Boeing 787-9 Dreamliner aircraft (ZB002) it was equipped with 90 seats and plenty of testing equipment. All parameters are recorded and analyzed by the engineers accompanying the aircraft throughout the test period. On board are Rolls-Royce engineers who monitor engine performance Rolls-Royce Trent 1000, which will also be found on the aircraft commissioned by Air New Zealand.

After Auckland, Boeing 787-9 will reach Alice Springs, Australia, where it will be subjected to high temperature tests. The aircraft will stand on the ground at temperatures that will exceed 35-38 degrees, and then operate flights.

After this test period, the aircraft will return to Seattle where final tests will be analyzed and validated. Two more aircraft dedicated to ground and air tests will be built and will have fully equipped cabins. The first Boeing 787-9 is scheduled to arrive in the Air New Zealand fleet in mid-July.