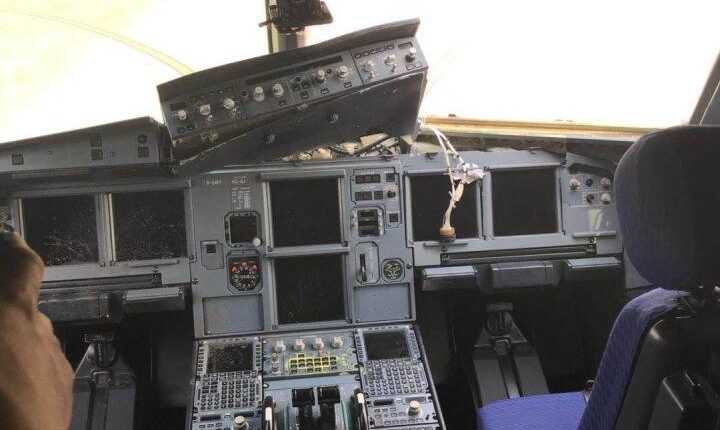 The pilots of the 3U-8633 Sichuan Airlines flight had an unfortunate event. While at 9800 meters altitude, the right cockpit windshield broke, causing injuries to the co-pilot and significant damage to flight equipment.

Today, the cabin crew and pilots of flight 3U-8633 Sichuan Airlines went through an unfortunate event. While flying on the Chongqing - Lhasa (China) route, at about 9800 meters, the co-pilot's windshield broke.

The first officer was injured and part of the plane's control panel was destroyed. Oxygen masks for passengers have been released. The commander initiated the emergency descent to 7100 meters - minimum safety altitude due to the mountains in the area. Then the descent continued to 3000 meters, safe altitude for passengers and crew.

Finally, the Airbus A319-100 aircraft was brought safely to the ground. He landed on runway 02R of Chengdu airport. A manual landing was performed because the on-board equipment was damaged. The co-pilot and a cabin crew member were injured and received emergency medical care.

Sichuan 3U8633 from Chongqing to Lhasa diverted to Chengdu. Lost one windshield at FL332. Descend to FL240 due to high terrain (@flightradar24 date). Cabin decomp. FCU failure and some parts sucked out. Landded safely with bust tires. One pilot and one cabin crew injured. pic.twitter.com/8aViRZoOE0

Due to the loud noise in the cockpit, the pilots were unable to establish the connection with the control tower, but reported the incident through the transponder.

CAAC Southwest Regional Administration officials have initiated an investigation to determine the causes that led to this incident. According to the technical report, the windscreen was the original one. The aircraft had accumulated 19.912 flight hours in 12.920 flight cycles without any problems. The last check you type C was made on 9 March 2017. And a Type A check was made on April 12. No technical problems were reported in the last 15 days. The investigation is ongoing.

From November 2018, RYANAIR flights from Bosnia and Herzegovina