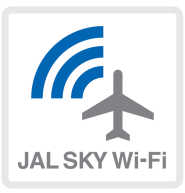 By Sorin Rusi On NOT ANYONE. , NEVER
0 244
Share FacebookTwitterPinterestLinkedinWhatsApp
Delayed plane? Flight canceled? >>Claim compensation now<<for delayed or canceled flight. You can be entitled to up to € 600.

Japan Airlines (JAL) will introduce the service JAL SKY Wi-Fi this summer. The high-speed wireless Internet service will be introduced gradually on board the aircraft used on JAL international flights. KU broadband connection technology will be used and the connection will be provided by eXConnect equipment by Panasonic Avionics Corporation (Panasonic).

The first airplane equipped with JAL SKY Wi-Fi will be a Boeing 777-300ER used on the Tokyo (Narita) - New York (John F. Kennedy) route. From 15 to July 2012, passengers on the route mentioned earlier can enjoy the internet on their own gadgets (tablets, laptops, smartphones). The service will be available for all classes, but for a fee!

JAL plans to distribute the Internet on flights to Chicago, Los Angeles and Jakarta by the end of October this year and on flights to London, Paris and Frankfurt next spring.

The JAL SKY Wi-Fi service will be charged - $ 11.95 for the first hour or $ 21.95 for 24 hours upon activation. Customers purchasing the 24 hour package can enjoy the internet on JAL connecting flights as long as the aircraft are equipped with JAL SKY Wi-Fi and within the time limit.

Between 15 July-30 September 2012, customers of First and Executive Class can test, for one hour, the JAL SKY Wi-Fi service.

The Boeing 787 Dreamliner arrived in Philadelphia