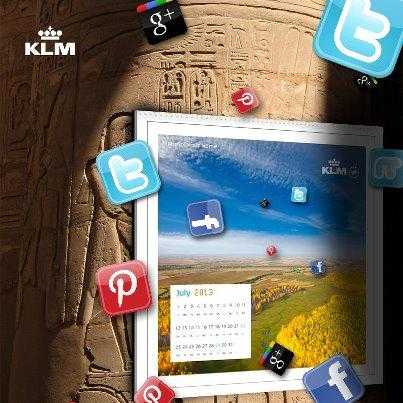 KLM invites social media fans to participate in the 2013 calendar

By Sorin Rusi Last updated NEVER eat. , NEVER
0 237
Share FacebookTwitterPinterestLinkedinWhatsApp
Delayed plane? Flight canceled? Claim compensation now for delayed or canceled flight. You can be entitled to up to € 600.

KLM, the former national airline of the Netherlands, has started to develop more and more social media projects. I can say that it is one of the few airlines that have started to pay more attention to social networks.

The latest project is KLM Fan Calendar NEVER. Annually, KLM creates a wall calendar with the most beautiful photos from the operated destinations. This year, KLM invites all fans of social media to contribute to its achievement. Those interested can upload a favorite photo from a trip (on, can promote it on all social networks - twitter, facebook, google +, and the first 12 photos, the most voted, will illustrate the 12 months of the KLM 2013 calendar. The campaign lasts until on 29 June inclusive!

For KLM fans, the calendar will also be found in the KLM online store!

And I invite you to read about social media team KLM - some are paid to stay on Facebook!