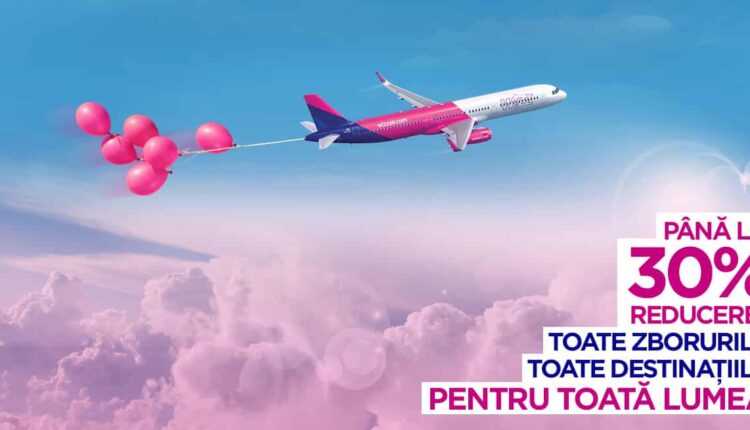 Wizz Air, one of the fastest growing airlines in Europe and the leader of low-cost carriers in Central and Eastern Europe, is celebrating today the 14 anniversary of the company with two special days of discounts.

Wizz Air passengers can discover 141 destinations throughout the entire network with a discount up to 30%, valid on all routes, for new bookings, made until May 19, at midnight.

Wizz Air promotion: 20% on any ticket. Offer valid only…

30% discount on Wizz Air tickets for all destinations,…

Now is the time to book your plane tickets for your next vacation. From Bucharest, you can travel to Europe at rates from 39 lei / segment. If you want a beach holiday in the shade of palm trees, you can opt for Dubai, Tenerife or Tel Aviv.

If you want to explore castles and mansions, enjoy culinary traditions and street shows, you can opt for holidays in Spain, France, Germany, Poland or the United Kingdom.

The reduction applies to fares, including non-optional fees and charges and small cabin baggage. The discount is only valid for new bookings made on wizzair.com or via the mobile application, on 18 and 19 days.

Over the last year, WIZZ has achieved milestone goals as it continues to grow by more than 24% per year and has transported 30 to millions of passengers enjoying the lowest fares, easy booking system and excellent on-board service. aircraft.

In addition, the company is currently experiencing the largest operational increase in its history, with a total of 21 of aircraft allocated to its European bases in only 17 weeks, which means adding 70 of new services, but also other 700 of weekly departures. additional in the already expanded network.

Three new destinations have been inaugurated in 2018 - Athens, Harkiv and Vienna. Moreover, Wizz Air has officially started operations of its UK-based company at London Luton Airport, on 3 May 2018, with the first flight between London Luton and Bucharest.

Wizz Air has also continued to support the communities in which it operates, by adding a new Wizz Air semi-marathon in Katowice and extending the sponsorship title for the Budapest Half - Marathon by another five years. The airline also gives young talents the opportunity to test their skills in the annual WIZZ Youth Challenge case study competition, which is in its second edition.

Currently, the Wizz Air fleet consists of 96 from Airbus A320 and A321 aircraft - one of the youngest in Europe - and transports passengers through its various network in Europe and beyond, from Tromso, one of the northernmost points, and as far as Dubai, in the far south.

Day by day, the team of aviation professionals now made up of nearly 4.000 people from 45 countries offers superior on-board services as well as innovative customized services such as Flexible Travel Partner or Fare Lock.