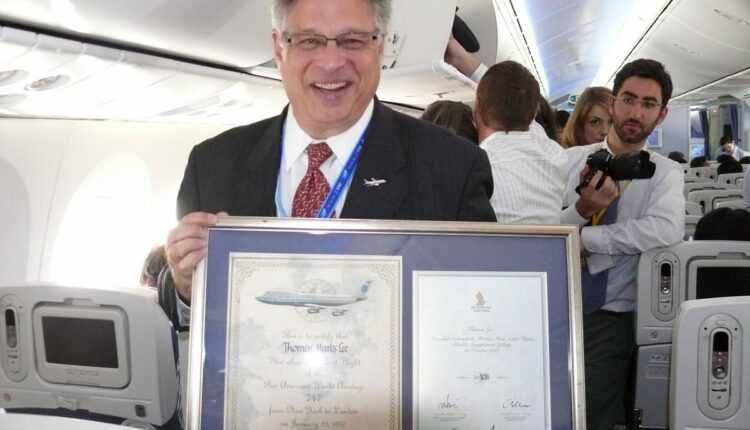 On January 22, 1970, the first Boeing 747-100 in aviation history took off on the first commercial flight. He was on the New York - London route. The aircraft was under the color Pan American World Airways (Pan Am), the launch customer for Boeing 747. Initially the inaugural flight was scheduled for the evening of January 21, but a technical problem at one of the engines delayed the flight by about 6 hours, until 22 January.

The bodies of the 11 Ukrainians, killed by the accident ...

After 45 years after the first flight in Boeing 747 history, colleagues at airwaysnews.com spoke to Thomas Lee, one of the passengers on the inaugural flight.

At that time, Thomas Lee was only 17 and was a teenager eager to discover new, curious and fearless things. Lee's father was a loyal Pan Am passenger, so the whole family was invited to this historic overseas flight.

The first Boeing 747 aircraft scheduled to operate the inaugural flight had take-off problems. Thomas Lee recounts a flameout on engine four, and the takeoff was canceled. Fortunately for Pan Am, the second Boeing 747 "Victor Clipper" (N736PA) had been delivered the day before and was in the hangar.

The story of the first flight operated by a Boeing 747

It took about 6 hours to prepare the aircraft. During this time, passengers were transferred to an Italian restaurant in New Jersey where they attended a party. When they were flown back to John F. Kennedy Airport, New York, 30 people decided that this first 747 flight was too dangerous and they did not board the aircraft again.

As a teenager, Thomas Lee lived the experience of the first flight from another angle. He was not interested in the textile material of the chairs or the models on the shiny silverware. His observations were more general in character. He was fascinated by the largest passenger aircraft, which benefited from an interior staircase, bar and lounge area.

Because they could not transfer all the catering equipment to the second aircraft, a buffet was created in the kitchen and each served as desired. Passengers were allowed to go to the cockpit and talk to the crew, and the restrictions were not as severe as they are today. This was also possible because it was an inaugural flight, a unique experience.

Lee recounts that the sensation of entering the Boeing 747 was similar to that of the Grand Canyon. Note that this was the first 2 color aircraft with a small upper deck. When they took off, the aircraft slowly rose to cruise altitude.

The inaugural flight of the Boeing 747-100 Pan Am held the record for the number of passengers carried over the 37 for years. On board were 20 crew members and 335 passengers. The flight from New York to London took 6 hours and 43 minutes.

Thomas Lee is a lucky man. Lee was on the inaugural flights of 747-8, 787 and A380 aircraft. At the time of the interview, Lee was on the first flight operated by Airbus A350 XWB Qatar Airways. So far, it has flown 7.3 millions of miles. The preferred aircraft remains the Boeing 777, the first aircraft developed entirely on computers.