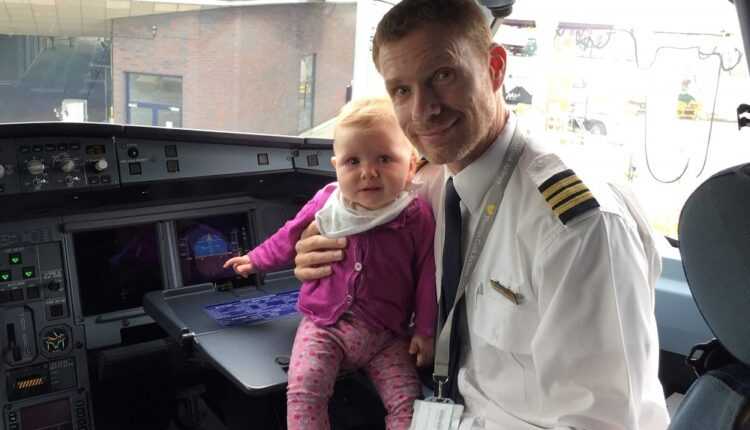 The story of the day: from pilot Thomas Cook to supermarket worker.

Rhodri Manley, captain of the Airbus A320, has worked in commercial aviation for more than 20 years. The pilot's life changed completely during the Covid-19 pandemic. Now the aviator works in a supermarket in Great Britain to be able to support his family. Despite the difficulties, he says the pandemic has revealed a positive side to the global crisis.

"I trained in 1999 and started directly as a pilot for commercial flights in 2000. During this time, I had only one job.", Rhodri remembered.

No matter if he had a university degree in chemistry and management, Rhodri had always been excited about outdoor activities such as mountaineering and sailing. At an early age, he began working in a local mountaineering shop and was looking for a career in which to use his personal skills.

"My passion in university was mountaineering, nothing to do with flying. But I was always interested in flying because my father was a pilot, although [initially] I didn't just want to do what my father did. I loved mountaineering and ended up working in a shop selling mountaineering equipment, and for about four years I tried to think about what I wanted to do in life. ”

"Since I was a very active person, I thought flying would be a good option. I managed to get into one of the airlines with a sponsored cadet program. They helped me join the company and I started working for them after that. ”, said Rhodri.

"Since I was a very active person, I thought flying would be a good option."

The pilot's career is rewarding, but complicated, because every day spent in the flight cabin brings different challenges and requires knowledge in different areas, as well as strong physical health. However, the captain says he misses being a professional pilot and notes that despite the job, it could often be due to changes and pressure changes in an aircraft cabin, but it is a small price to pay if a person loves aviation. .

"Every day brings you different challenges. It's pretty challenging. You fly with different people all the time, so you get to know them. […] Even air traffic controllers - after 20 years, you recognize the voices of all the people of different countries, even if you have never met them. It's an amazing thing. "

After losing his job to Thomas Cook, his first employer, due to his bankruptcy at the end of 2019, the pilot was lucky to find a new job at Wizz Air very quickly. However, a few weeks after training at the new company, Rhodri was fired again. This time because of the pandemic.

"I spent most of the winter without making any money or earning very little, because he had just been fired from Thomas Cook, after which I was fired again." it was pretty scary. ”

The consequences of the pandemic were very stressful for the family, as even experienced aviators faced a shortage of jobs in the market. Rhodri noticed that his family began to run out of savings and tried to build a backup plan to ensure financial stability.

"I never had to think too much about having enough money."

"In a way, I'm very lucky that, as a pilot, my income wasn't bad, so I never had to think too much about having enough money […]. When I was fired for the second time and I didn't know when I would return to work, the first thing I thought about was where I would live. Will I be able to stay in my house? That was the biggest concern. "

It became clear that he would not be able to fly again too soon. He realized that if he did not return as soon as possible, he and his family would run out of money. So she applied for a job at the local supermarket to make a living for the family.

"Because neither I nor my wife had qualifications in healthcare or education, industries in which you could still work, none of us had very good job prospects. Meanwhile, more and more people have started buying things online, and local supermarkets have started looking for more staff. We both got the job in the same supermarket. ”

"I want to be a professional, I want to learn as much as I can."

"It is fundamental for a pilot to see problems and find solutions. We simply needed money to continue to pay the bills, to buy food. Since we both worked in the supermarket, we could still take care of our children and make sure we could stay in our house as long as we needed to. We couldn't go on vacation, we couldn't buy a new car, we couldn't buy new clothes, but we didn't worry about being kicked out of the house. "

The family has always been first in his life. While the pandemic has had a painful impact on his career, the captain says he has found a positive side to the crisis.

"My wife has a full-time job, while I can only work part-time, because my hours have to match those of my wife, because we need someone to take care of our children. My wife earns twice as much as I earn. [..] but I spend a lot more time with my family. Normally, in the summer, I would have been very busy and not spent any time with my family. In the last nine months, we've been able to do things we wouldn't have done if I had worked, it was fantastic. I haven't had that before. "

"Even now, when I work in the supermarket, I take the same approach as in the pilot's life - I want to do my best, I want to be a professional, I want to learn as much as I can."

The European Union will launch a vaccination passport.