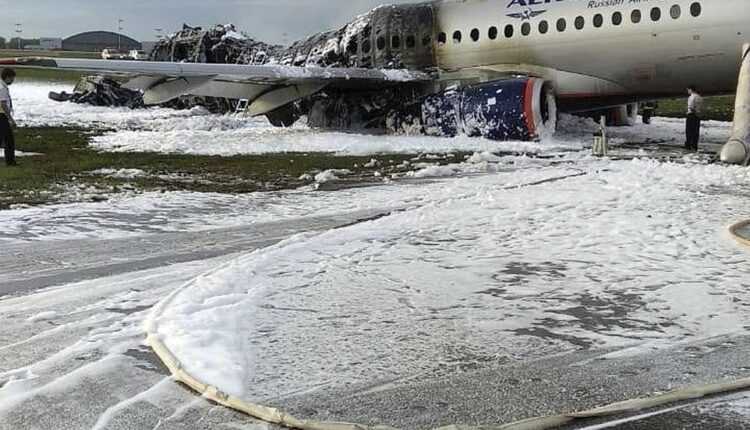 About 2.5 months have passed since the tragic Moscow plane crash, which resulted in 41 losing their lives. The first information from the accident investigation appeared, which took place on 5 May 2019.

The aircraft was struck by lightning

According to the procedures, the pilots requested to return to the departure airport, in this case being the Sheremetyevo International Airport in Moscow.

But the aircraft was much heavier than normal landing parameters (MLW + 1600 kg). The Sukhoi Superjet 100 Aeroflot (RA-89098) had almost full tanks.

The landing gear failed and pierced the wing

At 18: 30, the plane reached the runway for the first time, with a speed of 293km / h. He jumps 2 meters and follows the second more violent touchdown, which led to a jump of 6 meters. At the 3 touchdown, the main landing gear failed and pierced the wing tanks. Sukhoi Superjet 100 Aeroflot caught fire.

The cabin crew started evacuating the plane until it was completely engulfed in flames. Tatyana Kasatkina was the stewardess of the SU1492 flight. He saved lives "by force"! 78 of souls were aboard.

Unfortunately, 41 people died as a result of this accident. We can say that some of them died in days. There were many others passengers who made it difficult to evacuate. They were concerned about their luggage, instead of running away from the flames. Do not be an idiot, middleman, and senseless passenger!

We are waiting for the final report. As you can see, there were several situations that led to this tragic accident.

Sukhoi Superjet 100 has lost the confidence of the airlines

Following the tragic 5 accident in May, Sukhoi Superjet 100 lost support from airlines. Some have given up orders for SSJ100, others are considering removing them from commercial service. They complain about the lack of parts and technical support from the manufacturer.

At the same time, Russian authorities have requested that all Sukhoi Superjet 100 aircraft be carefully checked. There are over 140 aircraft, which were already inspected in June. But new checks are not excluded. A petition against Sukhoi Superjet 100 has been signed by over 200 000 by people.

The first flight of the Boeing 777X was delayed until 2020