The plane is the safest means of transport, but also the fastest. The statement is confirmed by statistics on the number of accidents in aviation.

2015 was the safest year in aviation with 16 casualties. As a result, 560 people lost their lives. Accidents involving commercial aircraft with a capacity of over 14 seats were taken into account.

About overbooking flights: why, how, when and what rights ...

There are many incidents in aviation, but they are minor or medium, and there were no casualties. Among the incidents recorded, the most common occur due to severe turbulence and cabin depressurization.

Such incidents were also recorded among the Romanian companies. The most recent: 13 May 2016 - TAROM ROT217 flight Bucharest-Belgrade (problems with the pressurization system / the plane landed at the "Traian Vuia" International Airport in Timisoara); 19 June 2016 - Blue Air flight 0B160 Milan Linate - Bucharest (cabin depressurization near the final destination - Henri Coandă International Airport).

To understand depressurization, first let's see how the pressurization is done. Pressurization is required for altitudes greater than 3800 meters above sea level to protect crew and passengers from the risk of physiological problems caused by low pressure.

At ground level, the plane is the same pressure as outside. The pressure inside the cabin is called technically cabin altitude. So, cabin altitude zero is considered at sea level, where the pressure is 101,325 pascals (14.696 psi).

As the plane climbs to the cruise ceiling, the cabin's pressurization is gradual. But the pressure from the ground will not be maintained. In a commercial flight, cabin altitude is scheduled to gradually drop from the altitude of the home airport to a maximum (2400 m / 8000 ft). This pressure inside the cabin is then maintained as the aircraft flies at cruise altitude (10 000 meters - 12 000 meters). When lowering, the cabin pressure is gradually increased until it reaches the ambient pressure at the destination.

You may be wondering why the sea level pressure is not maintained and has been set to a maximum of 2400 meters. In the airliners, cabin altitude is maintained during flight above sea level to reduce presses on the fuselage. These presses they are proportional to the pressure difference inside the cabin and outside the cabin.

For passengers, maintaining the cabin pressure below 2400 meters, conditions such as: barotrauma, decompression sickness, hypoxia are prevented.

In other words. When you fly by plane at 10 000 meters, in the cabin you will feel the pressure at maximum 2400 meters. It's like when you climb the mountain at 2400 meters (towards Moldoveanu Peak), where the air is colder and rarer. Naturally, each passenger will feel this pressure individually. People with health problems, such as pneumothorax, are advised not to fly until fully healed.

Starting with 1996, FAA (Federal Aviation Administration) adopted the 25-87 amendment, which imposed new regulations on certified airplanes to fly at altitudes greater than 7600 meters (25000ft). Aircraft are designed in such a way that passengers will not be exposed to cabin altitude greater than 4600 meters after failure of the pressurization system to 12000 meters.

In the event of rapid depressurization at 12 000 meters, the aircraft is designed so that passengers will not be exposed to cabin altitude greater than 7600 meters (25000ft) for more than 2 minutes.

There are 3 types of uncontrolled depressurization: explosive, rapid and gradual / gradual. Depending on the nature of the decompression and the type of aircraft, the duration of depressurization may vary from one second to several minutes.

Explosive decompression: takes place at an alert pace, usually in 0.1 - 0.5 seconds. The risk of pulmonary truamatism is very high. Uninsured objects in the cockpit can become projectiles due to the force exerted by the explosion. These are usually fatal accidents.

Quick decompression: takes place in seconds. The risk of lung trauma is still present, but significantly lower when compared to the explosive decompression rate.

Any depressurization occurring at altitudes greater than 3000 meters (10 000 ft) requires the aircraft to rapidly descend below 2400 meters (8000 ft) or at a minimum safety altitude. Do not panic if you feel a rapid descent of the aircraft. The pilots follow the procedures for such situations.

In the depressurization process, oxygen masks are activated. Oxygen mask it is part of the emergency system. In case of uncontrolled decompression, the oxygen mask automatically falls above / in front of the passenger seats. In each row there is an additional mask (3 places - 4 masks). The oxygen mask is made of a yellow silicone material and elastic bands for attachment. They can also be provided with a pouch, which is attached to the tube connected to the oxygen source. Careful! This bag does not swell. It acts as a concentrator or recirculator. 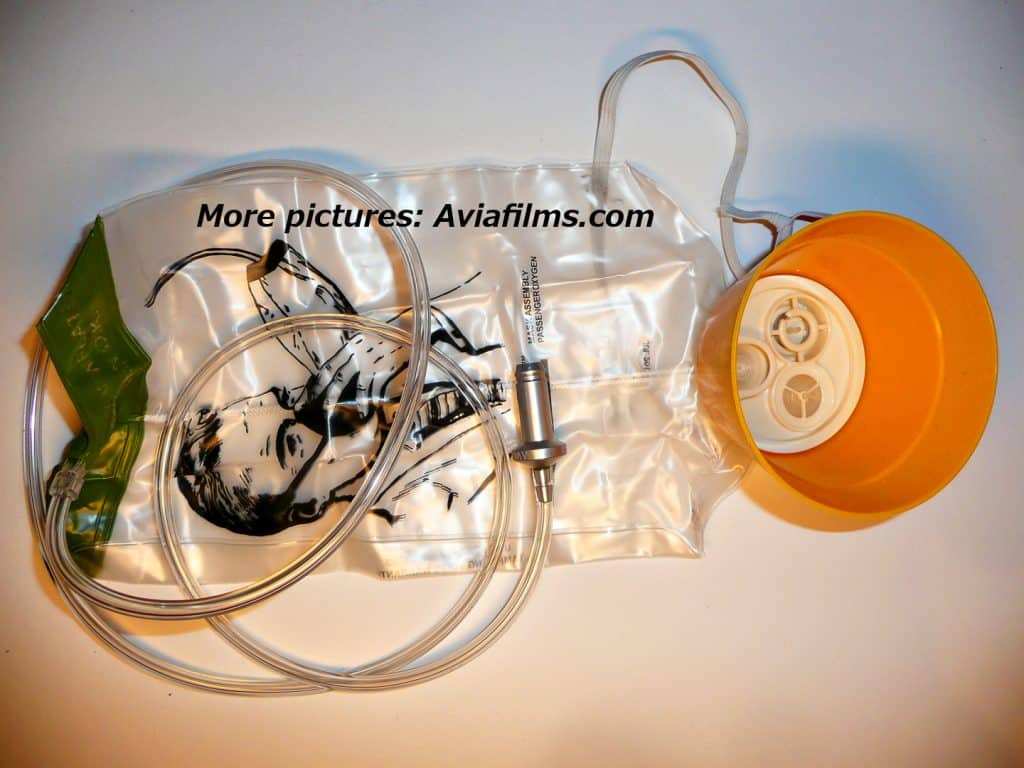 The oxygen mask provides oxygen to the passengers, during which the pilots lower the aircraft to the safety ceiling of 2400 meters (8000 ft). The oxygen is not unlimited. It was calculated for several minutes (up to 15 minutes), the time required for the plane to reach the altitude of 2400 meters where the air is breathable.

Where does the oxygen come from? Depending on the type of aircraft, there are 2 oxygen generating systems.

Central source of oxygen. It can be an oxygen cylinder located in the aircraft hold and connected to all oxygen masks. By pulling down the mask, the system only supplies oxygen to the mask.

In the case of cabin depressurization, the crew is ready to intervene. The pilots are trained for such situations and have clear procedures to follow. In most depressurization situations, the pilots decided to land on the nearest airport. Passenger safety is first and foremost in aviation!

When boarding the aircraft, pay attention to the safety briefing. The on-board companions bring to your knowledge some basics that you should follow in case of incidents / accidents. Some refer to the unlikely situations in which the plane may experience depressurization.

In the event of a depressurization, do not panic. Follow the instructions of the flight attendants. Secure your oxygen mask and breathe normally. In 99% of aircraft depressurization cases, everything ended well.

Clear sky and have flights without depressurization!

For some information mentioned above, we consulted with Vio Ludusan, pilot commander of air ambulance!