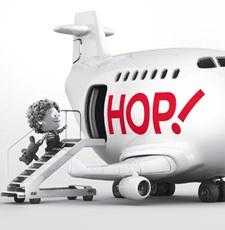 HOP !, the regional and semi-lowcost operator by Air France, is preparing to take off. HOP! It will start operating on 31 March 2013. Will operate 530 daily flights to 136 from destinations in France and Europe.

Below you have pictures of the first aircraft in HOP colors!

Prices start at 55 EUR, and in Europe will fly to cities in Spain, Italy, Austria, Germany and Hungary.