Marius Gerber is a good friend of Airlines Travel. His passion for airplanes and flights can be read on his face. He is an aviation spotter and a member of the Romanian Aeroclub - aeromodelling department. The other day, he made a ro-aero-trip on the route Iasi (IAS) - Timisoara (TSR) (technical stopover) - Cluj Napoca (CLJ) - Bucharest (OTP) - Iasi (IAS). Below is the story of the trip and details about flights, costs and conditions.

Because I am an aviation and flight enthusiast, an aviation spotter and a member of the Aerodrome Club, the aeromodelling department, I have a habit of scanning the prices for airline tickets online. At the beginning of September, while browsing prices on the websites of low-cost airlines, I came up with an idea: Can you take an air tour of Romania in 24 hours at a low price?

Being from Iași, I started thinking about a ro-aero-trip departing from my hometown. Knowing about the new route Iași-Timișoara-Cluj-Iași, which was to be inaugurated on October 1, I said that it is an opportunity to travel to Timișoara and Cluj. After a few searches I chose the route Iași (IAS) - Timișoara (TSR) (stopover) - Cluj Napoca (CLJ) - Bucharest (OTP) - Iași (IAS).

So I made the following reservations: 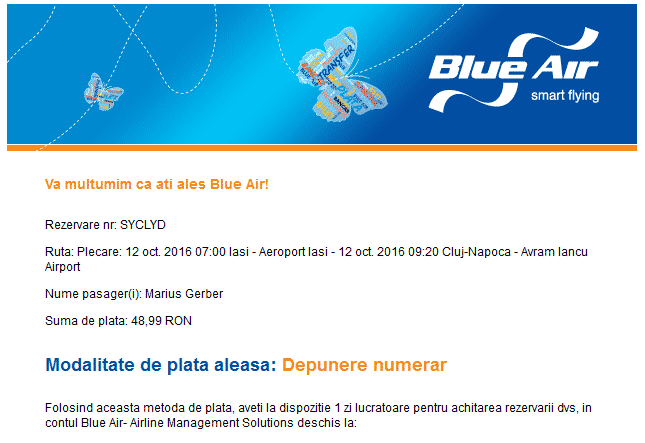 Yes, don't be surprised, the prices above are in Lei. But, because there is a "gift", you saw above that the price displayed on Blue Air was 89,99 lei. Well, there's a little secret to buying Blue Air tickets. If you choose to pay Blue Air tickets by cash deposit or bank transfer, you will receive a discount of 46 lei for round trip flights. I, having two bookings, had this discount on both bookings. An example below!

At Wizz Air, the ticket can be paid by cash deposit at the bank (there are 2 banks in Romania), without any costs other than the final price of the plane ticket. Careful! Payment to the bank must be made within one (1) business day, otherwise avoid the inconvenience of losing the reservation. Each reservation is given a code that you need to know when depositing the money at the respective bank's cashier.

I would like to mention a few aspects regarding the flight conditions for the 2 low cost companies. A comparison! At Blue Air, on domestic (domestic / domestic) flights, in the ticket price you have included a hand baggage of maximum 10 kg, a hold baggage of maximum 32 kg, a snack and a drink on board.

Check-in is at the airport, there is no extra charge. On international flights only 10kg maximum hand luggage is free, the hold and the consumption on board is at an additional cost. But Check-in at the airport is also free. There are special mentions at some airports.

At Wizz Air there are 4 types of luggage: Small hand luggage - free, Large hand luggage - for a fee and two types of hold luggage, 23kg and 32kg - for a fee. Check-in is free only if done online. This can be done a maximum of 30 days and a minimum of 3 hours before the flight. The weight of hold baggage may differ from one airport to another. Airport check-in is subject to a surcharge.

My advice: Read the terms and conditions of travel of the airlines very carefully so that you do not have unpleasant surprises at the airport!

Time passed quickly, and the long-awaited day has arrived! On October 12, I woke up in the middle of the night. The first flight (Iasi - Cluj via Timisoara) was scheduled for 07:00. As the airport in Iași can be reached quickly by car or taxi (there is also a bus, but I didn't know its schedule), I called a friend.

Boarding for domestic flights is made from Terminal 2 of IAII Airport. Arriving timely at the airport, I sat in a small queue at the check-in desk, where two boarding passes were printed: IAS-TSR and TSR-CLJ.

Then I passed the security check and waited for boarding. Around 06:30, the boarding gate opened where the usual queue was formed. I came out among the last ones from the terminal, I don't like to be crowded in queues. I did not say that I am a big fan of Iasi Airport and the rapid development of the last 4 years. However, there is a big downside - there is no bus to pick up passengers from the Terminal to the plane and vice versa. On the morning of October 12, there was a strong wind and heavy rain outside. I can say that I took a good shower from the exit of the terminal to the plane.

Blue Air flights OB6401 IAS-TSR and OB6405 TSR-CLJ they were performed with the Boeing 737-530 YR-AMB, an aircraft with an 25,5 years old. Even though it is an old aircraft, it looks very good, the interior is very good and works very well. On the IAS-TSR flight was an LF (Load Factor) of 100% and lasted 54 minutes. The flight went very well, with slight turbulence, however, the whole territory of Romania was covered by clouds.

During the flight we were served a sandwich and a drink of choice. The landing at TSR was very good, I even arrived with 15 minutes earlier. Arriving in Timisoara, 24 people, including myself, who had the final destination in Cluj, stayed on the plane. A person from the airport boarded us and checked the boarding pass for Cluj.

Initially we had to stay 30 minutes in Timisoara, but we stayed 40-45 minutes. The delay was due to Timisoara Airport, which delayed the boarding of passengers for Cluj and Iasi.

I liked this stop where I stayed on the plane. The fuel supply was also made, during which time we were told to sit on our seats, with our belts untied. After fueling I was quite free by plane, I, standing in front, I even went out a bit on the plane, I talked to the crew members, the pilots, other passengers.

Finally, the passengers boarded and took off for Cluj. As I wrote above, I was left from Iasi 24 passengers and, as I understand it, 64 passengers boarded. I can say that it was the most interesting flight I made with a plane: I did not take off well and I arrived at the destination. The flight took 31 minutes. It was like a little jump from Timisoara to Cluj-Napoca. Due to the short flight time, the sandwich was distributed before take-off, and in the flight I received only the drink. And, very quickly, we arrived in Cluj!

Here I was greeted by two spotter friends, Ovidiu Vereș and Rus Felix, with whom I was at the Cluj Airport fence and I managed to photograph the Blue Air aircraft, which took off to Iasi. I had time to talk to friends, beer and pizza, and in the evening I returned to the airport.

The next flight on the list was with Wizz Air, on the route Cluj-Napoca - Bucharest. Wizz Air flight W63491 was operated by Airbus A320-232 HA-LWT, 3,5 years ago. The flight took 39 minutes, a flight even with small adventures. Almost all the flight was medium turbulence, and the flight crew abandoned the sale on board and they all sat in their seats with their belts on. But I landed in Bucharest without any problems. In the capital I met with friends and stayed overnight.

The next day, on 13 October, I woke up early and headed towards the "Henri Coandă" Otopeni International Airport for the last part of my trip.

Arriving at the airport, I went to the check-in desk, took the boarding pass, did the security check and then went to the 52 gate where I waited for the boarding. About 30 minutes before the flight, the boarding was opened and everything went smoothly, without any problems.

Flight Blue Air OB6001, Bucharest - Iasi, was performed with the Boeing B737-46N aircraft, the age of 9,5 years ago. The flight took 45 minutes, during which time we were served a sandwich and a drink of choice, as Blue Air is used to on domestic flights. The flight was pleasant and peaceful.

- The whole aero-trip lasted 25 hours and 30 minutes
- All flights were on time, the small delays being insignificant
- In Cluj and Bucharest I met dear friends.
- Mai vreeeeeau! 😀
- I'm already thinking about another ro-aero-trip!