June 2018 is proving to be a very important one for aviation in Romania. In addition to the many domestic and regional routes, 2 long-courier routes were launched: Bucharest - Montreal and Bucharest - Toronto. The flights are operated by Air Canada Rouge, a subsidiary of Air Canada.

On 8 June 2018, after more than 10 years since the last long-haul flight operated to Romania, the Boeing 767-600ER Air Canada Rouge aircraft landed in Bucharest. Thus, the Montreal-Bucharest route was inaugurated, the first direct connection from Romania to North America. The second direct link, on the Toronto-Bucharest route, was inaugurated on the 10 June.

From April 26, Air Canada suspends all flights to…

In S2020, Air Canada Rouge gives up flights to…

Returning to the Montreal - Bucharest route, the inaugural flight AC1928 was operated with the Boeing 767-300ER (C-GHPN) aircraft. After approximately 8.5 hours, it landed at the "Henri Coandă" International Airport - Bucharest around 09: 45. The loading was very good, with Canadian officials saying there were only 2-3 vacancies. Boeing 767-300ER Air Canada Rouge aircraft are configured in 2 classes and can carry up to 282 passengers: 24 x Premium Economy and 258 x Economy.

After landing, the plane took part in the traditional salute of water cannons. Being an inaugural flight, the aircraft was parked in front of the presidential lounge at Otopeni - Bucharest Airport. It was welcomed by representatives of the press and by Canadian and Romanian officials

We were able to approach the plane, photograph it and admire it. It's not a state-of-the-art aircraft, the Boeing 767-300ER (C-GHPN) aircraft having 15 years of flight. But it was a historic moment for Romania.

2 weekly flights will be operated on the Montreal - Bucharest - Montreal route, departing from Bucharest on Tuesdays and Fridays. These flights open up new opportunities for faster travel to North America and from the Montreal hub to other destinations served by Air Canada / Air Canada Rouge and regional partners. 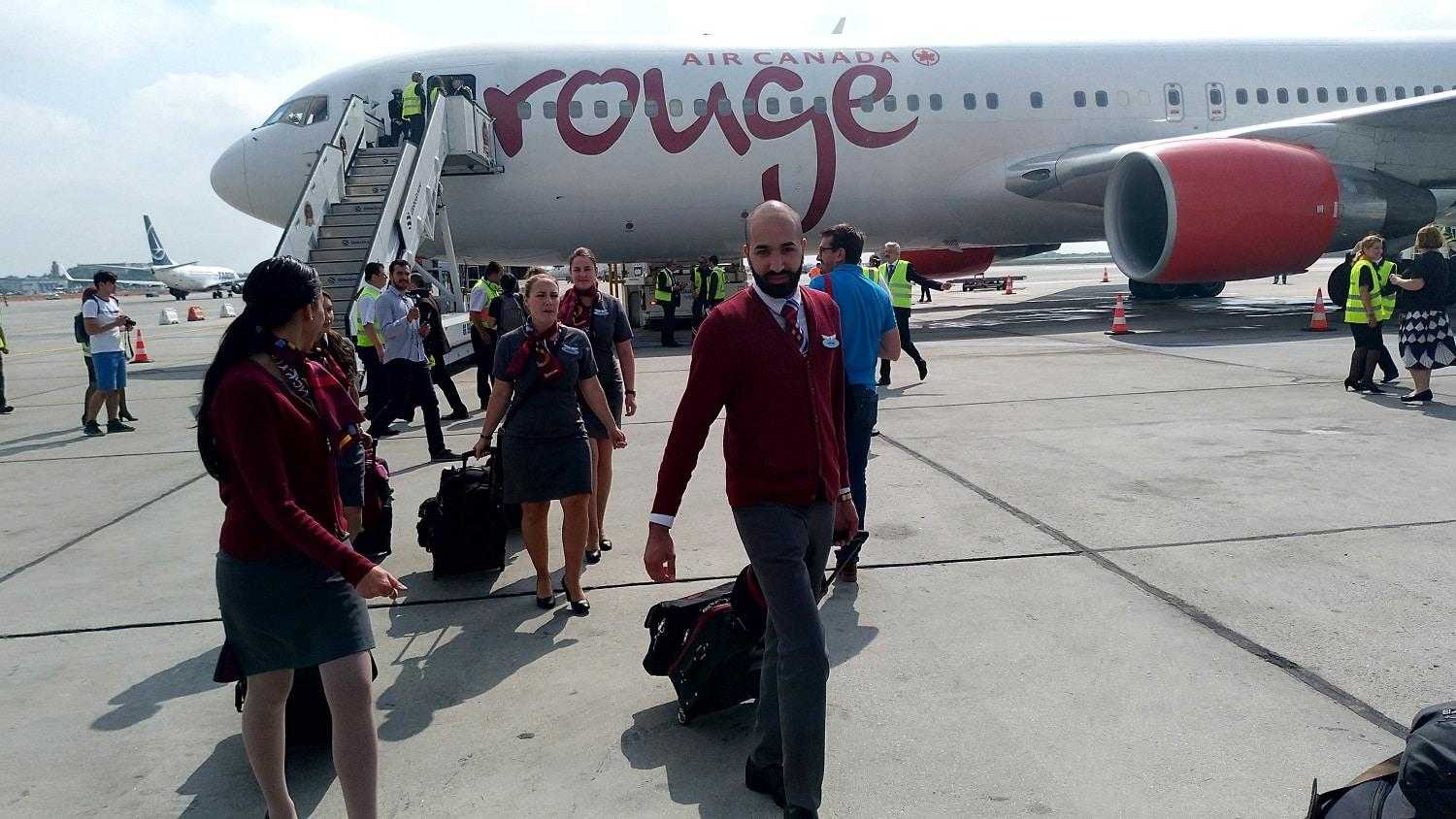 On June 10, the Toronto-Bucharest route was also inaugurated, which is also operated by Boeing 767-300ER Air Canada Rouge aircraft. The inaugural flight AC1964 was operated by the Boeing 767-300ER (C-FXCA), which is 28 years old. He took off with a slight delay, and in Bucharest he landed at 10: 25. The return is scheduled for 13 time: 45.

From our information, many air tickets have been sold on these routes, most of which are for flights with connections through major Canadian hubs. I sign that there is demand, and the planes will be full. As I have announced for some time, the 2 routes are seasonal, being operated until 5 October and 7 October respectively. If all goes well, we will be able to revisit Air Canada Rouge aircraft in the 2019 summer season. Then we see ...

Regarding the fares, they started at 899 $ (round trip), but obviously they increased with the loading of the aircraft. Air Canada Rouge is classified as a long-haul low-cost operator, part of the Air Canada Group. There are 2 main tariff classes: Economy (Standard, Flex and Latitude) and Premium Economy (Lowest and Flexible). Each class comes with its own package of facilities.

Thank you, Cristian (miles.ro) for photos!