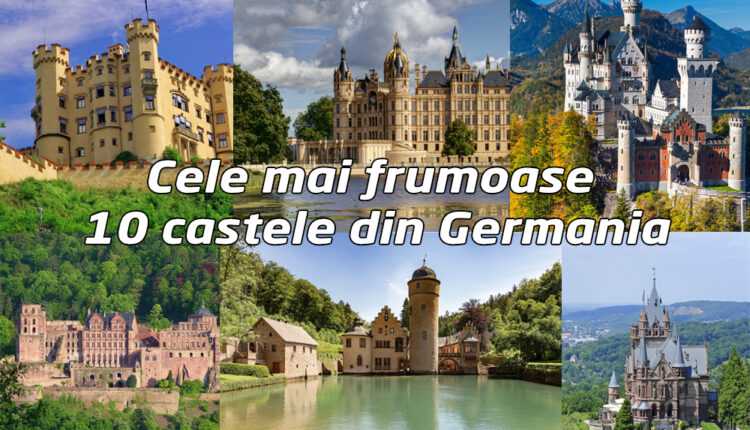 The 10 most beautiful castles in Germany

It is not a shame to admit this, we all dreamed of being part of royalty. Instead of praying that the frog you kiss will turn into a prince, or that a Handsome Boy on a white horse (or a limousine) will kidnap you and marry you, create your own happiness. Best of all, before you move to a castle, visit it. This way you can find out if you like the cold atmosphere or if you prefer a house on the beach, on the wave between the islands of Greece or Spain.

The 10 most beautiful and popular castles in Germany.

Mespelbrunn Castle is a medieval, early Renaissance castle built in a tributary valley of Mespelbrunn. In the Spessart Forest, between Frankfurt and Würzburg, this charming castle has become one of the most popular castles in Germany.

The special charm is also given by the surroundings, because the hills around the castle are covered with lush greenery, and the castle was built on a rock, in the middle of a crystalline lake. The castle has beautiful red tiles and stained glass windows, and inside there are many well-preserved armors and shots from the XNUMXth century.

The family of the Counts of Ingelheim owns the castle and still lives at the castle. They made sure it remained an invaluable gem in Spessart. Even if it is only an hour away from Frankfurt, you will really feel like you are in a fairy tale at Mespelbrunn Castle.

Drachenburg Castle has a long and interesting history. Built as a private villa in the late XNUMXth century, the wealthy banker who ordered its construction never came to live in it. In German, the castle is called "Dragon Castle" because of an old story that says that a hero killed a dragon on the same hill.

More interesting than the name of the castle is the mixture of architectural styles that make up Drachenburg Castle. With its dream towers, simulated battlements and square clock tower, Drachenburg Castle, perched on a hill near the Rhine, has a strange style that combines a medieval castle, a Gothic cathedral and Big Ben.

Paul Spinat was an eccentric man who opened the castle to the general public, often organized lavish parties and made sure that the interior of the castle was restored to the glory that consecrated it. Today, the rooms and exterior of the castle are completely restored and renovated and proudly holds the title of one of the most famous castles in Germany.

Once upon a time, long before the famous Neuschwanstein Castle was built, there was another castle called Hohenschwangau Castle, which had long been the residence of rulers, but had become a ruin some time before it was acquired by King Ludwig's father, Maximilian of II, in the XNUMXth century. Maximilian II rebuilt and redecorated the castle in a romantic Gothic style, perfect for a summer residence and hunting for his family.

The walls of the castle were beautifully painted with German historical legends. And this, many argue, shaped the timid King Ludwig's interest in fairy tales and legends. After the death of Maximilian II, Ludwig II spent a lot of time at the castle and redesigned all the rooms.

Dominating the horizon and perched in the middle of green forests on the northern side of the Königstuhl hill, Heidelberg Castle reveals its majestic sandstone ruins that rise majestically over the Neckar Valley and cast mysterious shadows over the picturesque cafes and old city streets. paved.

Once a Gothic masterpiece, Heidelberg was robbed, burned and struck by lightning twice. Heidelberg Castle has never regained its original glory and is still in ruins. However, about 1 million visitors visit - every year - the ruins of the castle, making it one of the top castles in Germany.

The first structure of the castle was built before 1214 and later expanded to two structures in 1294. Heidelberg Castle boasts one of the oldest palace buildings of the German Renaissance, the Ottheinrich building, and the castle ruins are some of the most important Renaissance structures. from Europe, north of the Alps.

Heidelberg Castle proudly houses the world's largest wine barrel in its cellar. With a height of 7m and a width of 8m, with a capacity of 220.000 liters of wine, Heidelberg Tun is not only larger than most apartments, but is also an absolute dream come true for wine drinkers everywhere.

Reichsburg Castle, also called Cochem Castle or Reichsburg Cochem, rises 300 meters above the picturesque town of Cochem and the River Moselle. It is believed to date back to 1100, when French King Louis XIV had his troops destroy the Reichsburg Castle in 1689. The castle remained a ruined colored stone for 180 years until the wealthy Berlin businessman, Louis Ravené, decided to buy the ruins and rebuild the castle in 1868.

Instead of restoring the castle to its original Romanesque style and condition, Ravené had its architects create a neo-Gothic castle that could serve as a summer residence for his family. Being one of the largest castles in Germany, Reichsburg Castle offers different tours, depending on what everyone wants.

If you like excursions, walks or hikes, you can walk to the castle and admire the amazing view of Cochem and the Moselle Valley. The walk to the castle, although steep, is a pleasant experience that lasts about 20 minutes, starting from the city center, and when you reach the top of the hill, you can relax in the wonderful gardens of the castle. If you don't mind the cold temperatures, the colorful leaves and the bright snow, then autumn and winter are the perfect seasons to visit the castle for its absolutely beautiful landscapes.

Built between 1847 and 1857, Schwerin Castle originally housed Grand Dukes before becoming the state. In the past, Schwerin Castle was used as a college for teachers, a hospital and a museum. Schwerin Castle is surrounded by lakes and forests and if you like ghost stories, ask Petermännchen, the castle's own poltergeist, who is believed to scare off unwanted visitors.

The architectural structure of the castle is widely admired by specialists, and the details - a variety of towers with golden domes and shining pinnacles - made Schwerin considered one of the most significant architectural creations of the era of romantic historicism in Europe.

Inspired by Wilhelm Hauff's romantic novel Lichtenstein, Count Wilhelm of Württemberg, Duke of Urach, built Lichtenstein Castle on the historic walls of the foundation of a medieval knight's castle. Lichtenstein Castle is a charming hunting castle, just an hour’s drive south of Stuttgart, which offers wide views of the Echaz Valley and the Swabian Alps.

With special attention to detail, Lichtenstein Castle and its neo-Gothic architecture are nothing but the perfect homage to the Middle Ages. Although there are a number of castles in Germany, this castle is extremely popular with German tourists.

Originally built in the 100th century and conveniently located between Lake Constance, the Black Forest and Stuttgart, this proud fortress offers majestic panoramic views of over XNUMX kilometers of rolling forest.

Over the years, Hohenzollern Castle has been destroyed and rebuilt several times, with only St Michel's Chapel miraculously surviving its destruction. The structure that exists today was rebuilt in the nineteenth century in English neo-Gothic style, but still houses much of the old treasures of royalty. The castle is open all year round and offers guided tours every day.

Hidden deep in a rural wave, forested and perched on a 70-meter-high rock, is the striking Burg Eltz Castle, built of stone and wood. For generations, Burg Eltz has remained in the care of the private property of the Eltz family, which has kept the medieval rural fortress intact for more than 700 years. The castle still boasts much of its original furniture and treasures of gold, silver and porcelain.

Set against the backdrop of an amazing valley and a stream, Burg Eltz is one of the best castles to visit in Germany and an absolute delight for guests of all ages.

Set in the Bavarian Alps and overlooking the Hohenschwangau Valley, is the XNUMXth-century Neuschwanstein Castle. Built at a time when castles were no longer strategically critical for defense, the mysterious Ludwig II insisted on having his own hiding place and ordered the building of the castle anyway. Ironically, just a few weeks after the king's death, the Romanesque palace for him alone opened its doors to the general public.

Today, millions of people travel to Neuschwanstein Castle to explore the timid king's private refuge and enjoy its stunning scenery and views. Often called the "Castle of the Fairytale King", Neuschwanstein Castle and the fantasy story of its king have attracted much international attention, making it one of the most popular castles in Germany.

Not even the tycoon Walt Disney was immune to the charms of this famous German castle. The iconic Disney Castle depicted in Sleeping Beauty and its real Disneyland counterpart were inspired by Neuschwanstein Castle. Between the breathtaking views and captivating legends of the mad King Ludwig II, exploring Neuschwanstein Castle is the perfect way to spend a day in Germany.

You didn't really experience Europe in all its splendor until you visited a castle or two, and Germany certainly has a lot more to offer in terms of beautiful and famous castles. Choose from our list of the best castles in Germany and start your own royal adventure.

There are definitely other unique and beautiful castles in Germany. If you have discovered such a wonderful place and you think it is worth mentioning in this article, we are waiting for your pictures on our Instagram or Facebook or you can mention us in your posts.

That being said, we wish you a summer full of travel :)!

COVID-19 Daily - August 3, 2021: Vaccines for teenagers, travel warnings in the US, increase the number of tourists in Spain!