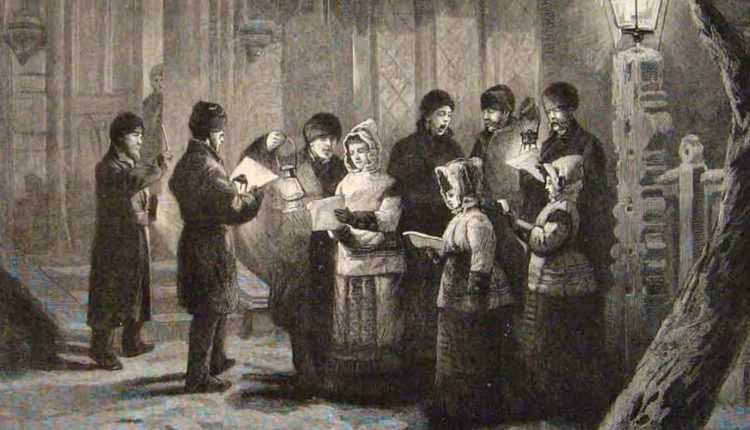 The tradition of Christmas carols, globally!

We are a few days away from Christmas, the occasion when people will carol and celebrate the birth of the Lord. In this article we will take a sleigh ride around the world to discover the traditions and carols of different nations.

Carols were first sung in Europe thousands of years ago. But these were not Christmas Carols, but pre-Christian/pagan songs, sung at winter solstice celebrations while people danced. The winter solstice is the shortest day of the year, usually around December 22nd. Carols were written and sung in all four seasons, but only the tradition of singing them at Christmas has really survived.

The history of carols

Christmas, commemorating the birth of Jesus, then began to be celebrated at the same time as the solstice, so early Christians began to sing Christian songs instead of pre-Christian/pagan ones. In 129, a Roman bishop said that a song called the "Hymn of the Angels" should be sung at a Christmas service in Rome.

Another famous Christmas hymn was written in 760 by Comas of Jerusalem for the Greek Orthodox Church. Soon after this, many composers from all over Europe began writing "Christmas Carols". However, not many people liked them because they were all written and sung in Latin, a language that normal people could not understand. By the Middle Ages (1200s), most people had completely lost interest in celebrating Christmas.

Beginning in 1223, Saint Francis of Assisi laid the foundation for Nativity plays in Italy. The stories of these pieces used to be told through singing, thus giving birth to the new Christmas carols and customs. The new carols spread to France, Spain, Germany and other European countries.

The oldest carol in the new generation of Christmas traditions was written in 1410. Unfortunately, only a very small fragment of it still exists. The carol was about Mary and Jesus meeting different people in Bethlehem. Most carols from this period and the Elizabethan period are fables, based very loosely on the Christmas story, about the holy family, and were seen as entertainment rather than religious songs. They were usually sung in homes rather than churches!

Traditional Christmas carols and carols have been a tradition for centuries, since they evolved from the pagan winter solstice songs that marked the cold season. But this caroling tradition has also been adopted by other countries globally, independently of Christian traditions.

Consequently, Christmas carols are sung in many countries, including England, Ireland and Wales; United States and Canada; South American countries; most countries in Europe, including Germany, Spain, Greece, Romania, Croatia and the Czech Republic; Russia, but also in various African nations, including the Democratic Republic of Congo, Zambia and Malawi.

The only countries that do not observe Christmas as a religious holiday are Afghanistan, China (except Hong Kong and Macau), Iran, Israel, Japan, Laos, Mongolia, Morocco, North Korea, Pakistan, Qatar, Saudi Arabia, Turkey, United Arab Emirates and Vietnam. And it's easy to understand, as we also don't celebrate certain religious holidays associated with those countries. But let's get back to traditional Christmas carols!

Carols in Great Britain, Canada, the United States or Australia

In the UK, caroling is an important part of celebrating Christmas. From late November or early December until Christmas Day, carols are sung in schools and services, including the traditional service. Carols are also sung in indoor and outdoor public spaces, including by carolers who go door-to-door to collect money for charity. The Celtic nations of Wales and Ireland have their own Christmas carols!

The British carol tradition was also adopted by Canada or the United States. Many well-known carols, including "O Little Town of Bethlehem" and "Away In A Manger" have their own versions with different tunes in the US, and the famous "It Came Upon a Midnight Clear" is an American carol written by American pastor Edmund Sears .

In Australia, the caroling tradition has been adapted to the summer season. Being a country in the Southern Hemisphere, you can't carol about winter at Christmas time, with scorching temperatures outside. Australian songwriters have tackled this rather surreal and unseasonal festivity and composed new carols that reflect the Australian summertime landscape. Carols like "A Christmas Day" and "The Three Drovers" reflect Australia's dusty desert landscape.

Carols from Greece and Cyprus

In Greece and Cyprus there is a tradition for children to sing carols on Christmas Eve, New Year's Eve and Epiphany (January 5). A bit like Halloween trick or treating, caroling children usually ask for a treat in exchange for a promise to return the following year to fulfill their musical wishes.

"The carols represent the Nativity experienced by the people. Sometimes this experience is more cultured, sometimes simpler, but if we analyze the message of carols we discover, regardless of their form, word for word the gospels that present the Nativity in detail. The significance of the carols comes from the joy with which people spiritually clothe themselves during this period to mark the coming of the Lord from heaven to earth.

We are happy and excited when we receive a guest, invited or uninvited. What words can convey the emotion we feel on Eve, when the baby Jesus is born? We express this joy through songs and gifts. In short, carols have the role of conveying the boundless joy that God is with us", says Dan Damaschin, a priest from Iesian, quoted by adevarul.ro/.

The tradition of carols dates back thousands of years and we still enjoy it today. Regardless of nationality or religion, after all, Christmas can also be a cultural, social celebration, with a focus on good deeds, tolerance and light in the soul.