I met the spring in the capital of Spain, one of the largest in Europe as a surface and with over 3.3 million inhabitants. Madrid is recognized as a green city, with many tourist attractions, parks, with a very well preserved history, with many points of interest for tourists, etc.

What NOT to do on the plane / Don't be an idiot, mitochondria and ...

How to make your electronic passport simple for 10 years, simple ...

To get there quickly from one area to another, the metro is the most efficient means of transport and the Madrid network is very well developed. It offers 12 fast lines that cover almost all of Madrid, including the connection with Barajas airport. Metro de Madrid It starts at 6 in the morning and runs late at night, officially until 1 and 30 minutes. The train frequency is between 2 and 5 minutes during the day, and the evening runs at 15 minutes.

Before I arrived in Madrid, the only information I was looking for was about the transportation network, especially for getting to the hotel quickly. Paravion, my partner on this trip, offered me accommodation at Hotel Victoria 4 from the Puerta del Sol area, fixed in the city center. The taxi would cost me about 30 EUR from the airport, so I tried to get acquainted with the subway quickly.

The T1 terminal of Barajas airport is the arrival / departure point from Madrid for those who choose to travel from Romania to Spain by air. Not to mention that like me, I inform you that you have about 10 minutes from T1 to the subway, especially if you are at the airport for the first time. There, before you get off the subway, there is a tourist information center where you can find details about the means of transport, take a map (free of charge) and buy tickets or season tickets.

The price of a trip varies between 1.5 EUR and 3 EUR, depending on the area and the lines used. For 10 trips, prices start at 11 EUR and can go up to 18 EUR. A ticket from the airport to the city costs 6 EUR, 3 EUR the price of the ticket plus Airport supplement from 3 EUR. As you can see, transportation to Madrid is not very cheap.

But I found out that there are subscriptions for tourists, and these are for zone A and zone T. Zone A of Madrid means the city itself and offers access to all means of transport, including on the route to the airport. Zone T also means the surrounding areas, including access to the light surface subway and you can reach Guadalajara and Toledo.

A traveler is well on the way, and Madrid is a city worth discovering at the same time, but also with the help of public transport. Tourist tickets have prices from 8.4 EUR / day for Area A. I took a 2 day subscription and paid 14.2 EUR. Validity is calculated from the first compost and can be 24 hours, 48 hours, etc.

In addition to the ticket, the package includes the map of central Madrid and the instructions for use. All possible and impossible rules are explained, including what to do when the ticket no longer works and is still valid.

I recommend that you keep the ticket in the holder with which it comes and do not hold it near keys, phones, protect it from moisture, etc. It can be demagnetized very quickly. This happened and I went to the tourist information center in Plaza Mayor to change the card. I explained the situation and the ticket was changed on the spot, with all the support I was telling you.

After taking your ticket / subscription, enter the subway. Line 8 it is the only one that connects the Madrid-Barajas airport with the Nuevos Ministerios station. Here it intersects with lines 10 and 6, two important lines in the network.

Line 10 I think it is one of the longest and connects the southwest of Madrid to the northeast, reaching the Santiago Bernabeu stadium, the home of Real Madrid. 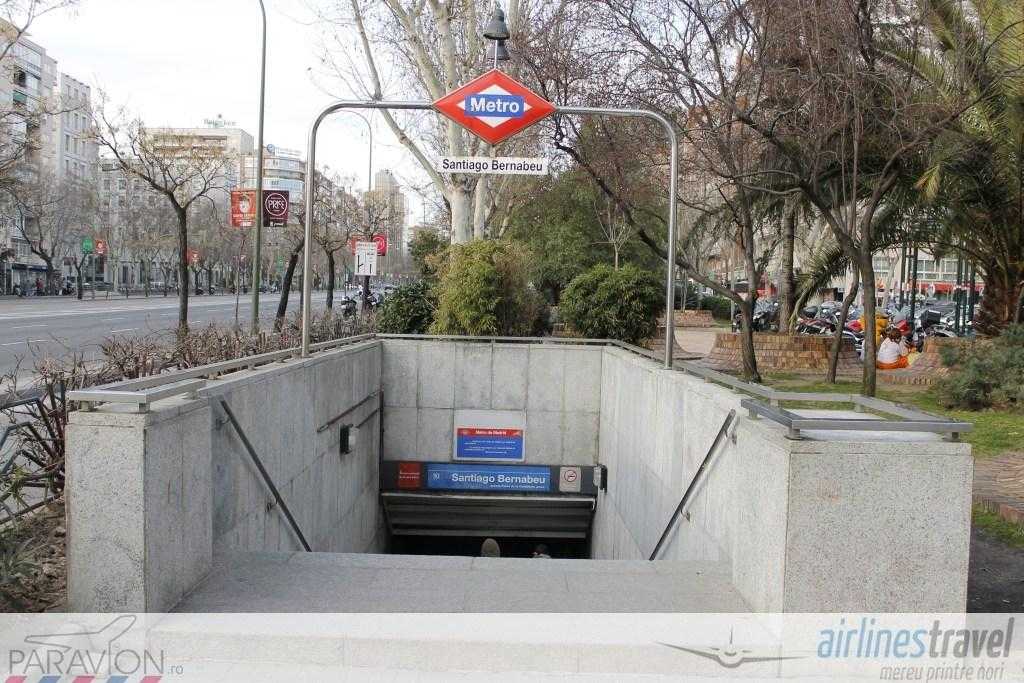 Line 6 is circular and surrounds the central area of ​​Madrid. It has connections to all the lines of the Metro de Madrid network.

The most important tourist area in Madrid is the market Puerta del Sol (SOL). Here is the 0 km of Madrid. The area can be compared to the Old Center of Bucharest, but much more developed. In the SOL you can easily reach the 1, 2 and 3 subway lines. I did about 45 minutes on the route: 1,2,3 Terminal station Barajas - Nuevos Ministerios (L8) - Tribunal (L10) - SOL (L1).

Near the SOL market there are also some of the most important tourist attractions: Plaza Mayor, Palacio Real, Teatro Real, Museum of Telecommunications, Palacio Santa Cruz, Cathedral of Almudena, Sabatini Gardens, many parks, etc. Below is a picture of the area covered by me within a few hours of walking. 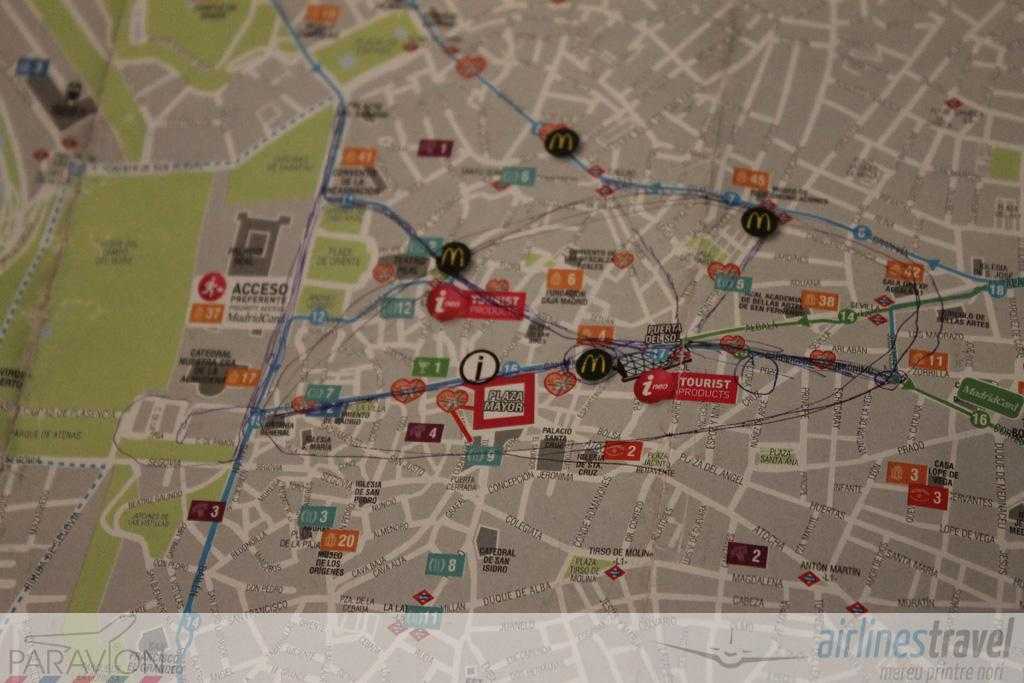 For shopping I recommend Gran Via Boulevard, the paradise of women with stores like Mango, H&M, Zara, Pull & Bear, Massimo Dutti, Bershka, Stradivarius, Oysho and the list can go on. I will give more details in an article dedicated to Madrid.

The city below Madrid

The Madrid metro network is one of the best developed in the world. It is a whole underground city, with subway lines, elevators, escalators, long corridors, etc. There are areas where transfer from one line to another can take 10 minutes on foot. Several times I also attended gymnastics because the stairs didn't work and I had to climb about 50 steps. The elevators can also go down to -4, depending on the station.

The trains have air conditioning, run every second, are well maintained. The new linings look really good, but I tend to believe that the Bucharest subway has better trains. Regarding the display and announcement of the stations, only the line from / to the airport has also in English.

On the Madrid subway I did not see shops and dispensers with juices, food, etc. I did not notice aggressive ads like they are in us, I did not see huge advertising spaces, etc. There are some spaces, but I think they are sold very expensive, many of them empty.

At them the subway lines do not intersect like we do (eg as in Heroes). But I appreciated how well the stations are signaled, with indicators to the lines of exchange or exit, with maps in each station, with information about the tourist objectives in the area.

The begging raised to the rank of art

Lately, I haven't seen beggars on the Bucharest subway. But not the same can be said about Madrid and the underground city. Here I met many people with "business" in begging. From the train accordionist to the band man, they all beg for a euro for a loaf. Here I saw CDs with games and movies (only covers) as in the old days, as it was in Bucharest in 2003-2004. 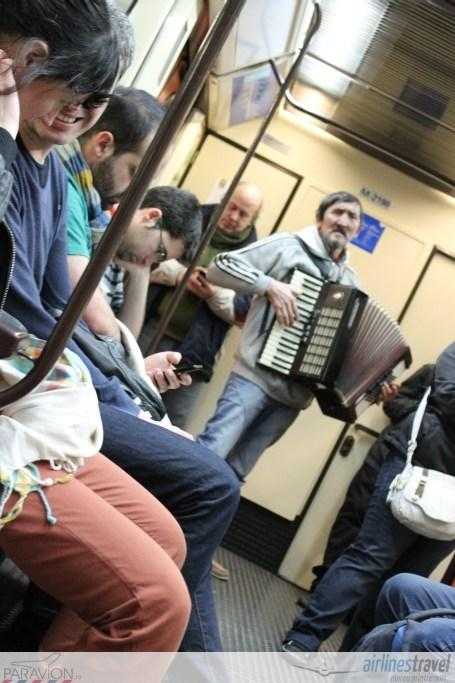 But begging is no longer practiced with the outstretched hand. Those involved seek to tell a story, to sing, to sell something, to impress travelers in one way or another. I was warned that there are also pocket thieves, so pay close attention to the goods.

I mention that most of them are from South America, but you will also prevent Romanians.

What to keep in mind about Metro Madrid:

- Metro de Madrid has 12 lines
- The 8 line is the only one that connects the city with the Madrid-Barajas airport
- Line 6 is circular and surrounds the center of Madrid
- It is good to get your subscriptions for tourists, go out cheaper
- In the underground city everything is very well signaled
- Take care of your pockets