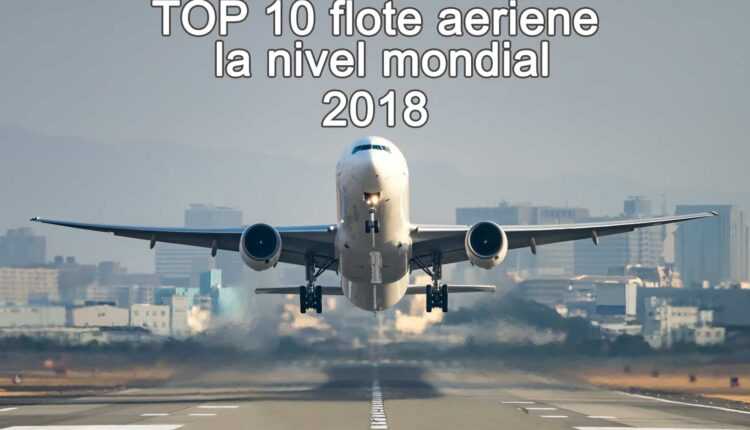 I've been monitoring aviation for over 6 years. I am passionate about flights, airplanes, statistics and numbers. I am closely watching the evolution of some airlines and I am happy to take part in important moments in aviation. I wrote about new routes, about launching airlines and even about making airplanes (from the project phase to the first commercial flight).

We have prepared a new TOP for you. It is about "TOP 10 air fleets worldwide" - ranking valid in 2018. You are probably wondering which airlines have the most planes. I also asked myself the question about the total number of commercial aircraft existing in the operational service.

According to worldwide information, there are approximately 28 000 of commercial aircraft (cargo and passengers). airliners.net announces the existence of over 39 000 aircraft, including military aircraft.

But let's not waste time and get to work. Below you have the largest air fleets, which were built in time and with a lot of money. We are talking about traditional airlines, with many years of flights.

We open the standings with 10, which seems to be owned by Air Canada (Star Alliance) and its subsidiaries. The Canadian air carrier has a fleet of NO aircraft (including subsidiary Air Canada Rouge and Air Canada Express). It is a painted fleet, consisting of Airbus, Boeing, Bombardier, Embraer aircraft. The operational network is made up of over 350 from destinations around the world.

According to our checks, the 9 is Lufthansa (Star Alliance) with its subsidiaries (Lufthansa CityLine and Eurowings). We do not include companies in the Lufthansa group. The Lufthansa fleet counts 449 of aircraft. Most are Airbus, from A320, A330, A340, A350 and A380 families. From Boeing, Lufthansa owns only 747. The Lufthansa CityLine subsidiary has regional aircraft from Bombardier and Embraer. The operational network counts over 370 of domestic and international destinations.

We remain in Europe, and in the 8 place we have the company RYANAIR. The largest low-cost carrier on the "Old Continent" has a fleet consisting of 457 of aircraft and fly to 205 destinations. RYANAIR owns a homogeneous fleet of Boeing 737-800 aircraft. Starting with 2019, it will receive Boeing 737 MAX 200 aircraft.

We fly to China to introduce you to the air carrier from the 7 position. This is China Southern Airlines, which owns a fleet of 555 of aircraft (including cargo). The fleet consists of Airbus, Boeing, Embraer aircraft. The operational network consists of over 200 of domestic and international destinations.

We stay in china and present the largest air carrier in the region. It is about China Eastern Airlines and theirs 626 of aircraft commercial (including subsidiaries' planes). SkyTeam member, China Eastern Airlines has an extensive network of over 220 destinations worldwide. The fleet consists of Boeing and Airbus aircraft, from the classic single-aisle aircraft to the most efficient and modern widebody aircraft.

In 5th place is the largest cargo air carrier in the world - FedEx Express. It has a fleet of fish 660 of aircraft (including partner fleets) and fly to 375 + destinations worldwide. The fleet is painted, consisting of Airbus and Boeing aircraft for long and medium routes, but also of ATRs and Cessna for short and regional flights.

In 4th place we have the largest low-cost carrier in the world - Southwest Airlines. About this company we can say that it is the pioneer of low-cost air transport. It began operations in 1971. It owns a fleet of 754 of aircraft and flies to 100 from destinations in North America. All aircraft are Boeing from the B737 family (737-700 and 737-800). Plus 300 new custom aircraft.

Here we are on the podium, and the 3 place belongs to the United Airlines (Star Alliance) carrier. According to our calculations, this air carrier has a fleet consisting of 779 of aircraft (including subsidiaries). The United Fleet flies to 342 domestic and international destinations. The fleet consists largely of Boeing aircraft, from the classic 737-700 to the modern Boeing 787-9 Dreamliner aircraft. United's largest hub is Chicago-O'Hare, from where it operates more than 530 daily flights to 188 destinations.

On 2 we have a carrier from the United States. It's Delta Air Lines (SkyTeam), which has an operational fleet consisting of 896 aircraft (including subsidiaries). The fleet is largely made up of Boeing aircraft, but those from Airbus have not been neglected either. Delta also owns the largest fleet of McDonnell Douglas MD-88 / MD-90 aircraft. The latter will be replaced by modern Airbus A321, Boeing 737-900ER and Bombardier CS100 aircraft.

In Romania we have Blue Air with the largest fleet - 29 planes; TAROM with 23 aircraft; Carpatair with 2 planes; Air Bucharest with 1 plane, CobrexTrans with 1 plane.