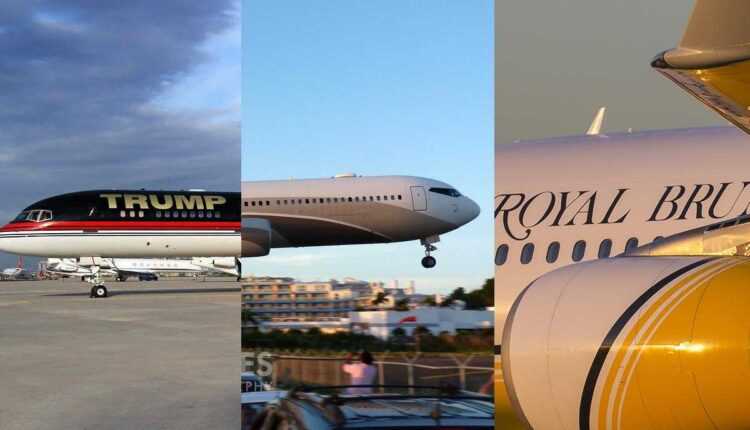 By Sorin Rusi Last updated NEVER, NEVER
8 19.220
Share
Delayed plane? Flight canceled? >>Claim compensation now<< for delayed or canceled flight. You can be entitled to up to € 600.

I don't think it's a secret that I'm passionate about airplanes and flying. I like to travel as much as possible by plane and I would really like to get on a plane. But this passion is also very expensive, so I am pleased with the commercial flights where I have to endure security checks, crowds and all kinds of people on board.

Top 5 the largest and most luxurious private aircraft

People with money travel to Business Class or First Class. Wealthy people rent planes when they need to. And the extremely wealthy people buy their own planes.

Business jets and private jets can be from Bombardier Challenger, Embraer Legacy, Embraer Lineage, Dassault Falcon, Gulfstream, etc., but they can also be large jets built on commercial aircraft structures, as part of the Airbus A319, Boeing 757, Boeing 767 and even Airbus A380.

In this article I will meet you with the largest and most luxurious private planes in the world, but also with their owners.

Donald John Trump (born June 14, 1946) is an American investor and businessman, television star and author of motivational literature. President and CEO of Trump Organization, an American real estate company. Trump is also the founder of Trump Entertainment Resorts, a company that operates numerous casinos and hotels around the world. She is the host and co-producer of the TV show "The Apprentice", released in February 2004 by NBC. According to the Forbes list of the world's billionaires, Donald Trump ranks 488th, with an estimated fortune of 2 billion US dollars.

In 2011, Donald Trump bought a Boeing 757 from Microsoft co-founder Paul Allen. The private plane cost 100 millions of dollars, but was equipped with a luxurious interior to fit Trump's style. There is also a private bedroom, a large flat screen TV, a desk equipped with the latest technology, leather sofas, a circular shower and even a gold plated sink. Even the buckles on the seat belts are plated with gold. Donald Trump is very picky and wants everything to be perfect on his plane.

The plane has John Dunkin (commander) and Larry Bryan (co-pilot) on the plane. The aircraft is 22.9 years old. He operated the first flight on 21-05-1991. It is powered by two Rolls-Royce RB211-535E4 engines, which allows it to land even on city airports. Engines are quiet, with low fuel consumption, thus reducing pollution. Donald Trump specifically chose these engines.

On the 4th place in this ranking made by me, is Roman Abramovici's plane, a Boeing 767-33A (ER) "The Bandit" worth 130 million dollars. Initially, the plane was ordered by Hawaiian Airlines, and later it was customized and joined Roman Abramovici's fleet.

Roman Arkadyevich Abramovich, born on 24 October 1966, is a Russian businessman. He is the owner of the Chelsea FC football team, England. In 2010, Abramovich was the 3 richest man in Russia and the 50 in the world according to the Forbes 2010 list, having an estimated fortune of 11.2 billion.

"The Bandit" is 10.8 years old, the first flight operated on 19-06-2003, and the range is about 10 kilometers. The interior is decorated with gold and chestnut wood. Among other things, there is a 000-seat table, a gilded kitchen and even a missile defense system on board. With such a plane, Abramovici could even transport his football team, with reservations.

Joseph Lau Luen Hung, born in 1951, is a real estate tycoon in Hong Kong, with an estimated fortune of 4.3 billion. He owns 61% of Chinese Estates Holdings.

And if they keep kicking him out of the house, he ordered a $ 747 million Boeing 8-153I VIP. The aircraft is equipped with the latest technologies to ensure the best in-flight comfort. This four-engine giant can carry hundreds of passengers in commercial service. Yet why did Joseph Lau choose such a model? Maybe because it is possible?

The Sultan of Brunei, Hassanal Bolkiah, is recognized as the most eccentric man on the planet. With an estimated fortune of tens of billions of dollars, Hassanal Bolkiah owns a car park consisting of about 7000 cars (some say they are 6000, others 2000, but that matters less), but also a fleet of nine aircraft, the most important being a Boeing 747-400 VIP and an Airbus A340-200 VIP.

For the second position of my top, I considered Airbus A340-200, an aircraft estimated at 220 million dollars. Sultan Haji Hassanal Bolkiah lives in the most extravagant luxury, including his planes have 24K gold interiors. To see the inside of it, click here :).

On the first place is one Airbus A380, being the largest commercial aircraft in the world with a carrying capacity of up to 800 of passengers in one class. Now imagine such a personalized plane for a single person and his entourage. The person in question is Prince Al-Waleed Bin Talal of Saudi Arabia. 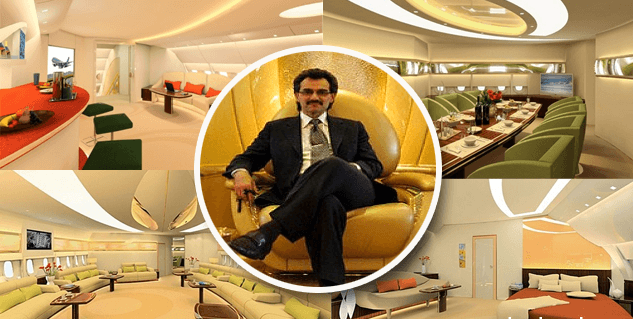 The aircraft is valued at $ 500 million - the aircraft cost $ 300 million and will cost about $ 200 million to customize to the liking of Prince Al-Waleed Bin Talal. In addition to the 5 luxury apartments, the conference room and the state-of-the-art entertainment system, there will also be a garage for luxury cars, a stable for camels and horses, and a special prayer room that will rotate to always face Mecca. The three decks will be connected by a spiral staircase, but there will also be a private elevator in the master bedroom. The design company Gol Q will take care of the arrangement of this Goliath.

On board the aircraft will also be arranged smaller luxury apartments for guests, but also a Turkish hammock lined with marble.

The scenario sounds great, except that this Airbus A380 VIP does not seem to have left the platform of the Airbus base in Toulouse yet. Rumors say that the aircraft is without interior and it is not known whether the prince will afford to pay its value. I think he can afford it, but he doesn't want it anymore. Until something specific, I keep this plane in the first position.

This is my ranking. I am convinced that there are many more private planes in the world, some more luxurious than others. If you have information about other luxurious aircraft, feel free to leave a comment. From the top 5, we can reach an even higher 10. I'm curious about what the richest people on the planet still have.

FlyBe has rented a Fokker 100 from Carpatair