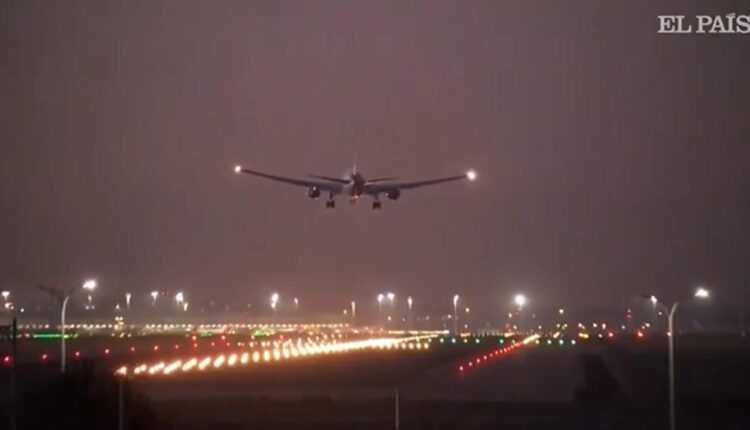 By Sorin Rusi Last updated NEXT Feb , NEVER
0 1.387
Share FacebookTwitterPinterestLinkedinWhatsApp
Delayed plane? Flight canceled? >>Claim compensation now<<for delayed or canceled flight. You can be entitled to up to € 600.

This afternoon, the Boeing 767-300ER (C-GHOZ) Air Canada took off from Madrid to Toronto at 14:57 pm. The plane was supposed to operate flight AC837 on the Madrid - Toronto route, and there were 130 passengers on board.

On the ascent, the tire of one of the wheels on the left leg of the landing gear exploded. A piece of rubber was pulled in the left engine, which led to its failure. And witnesses saw flames coming out of the engine. In aviation it is called flameout.

Following the incident, the pilots announced the control tower intending to return to Madrid airport. Taking into account the problems of the plane, the left engine damaged and the front wheelless wheel, the pilots had to keep the plane in flight for 4-5 hours to consume much of the fuel. This was done at a low altitude of about 2500 meters altitude, far from the inhabited areas.

While the plane was flying for fuel, a F18 military aircraft belonging to the Spanish Air Force approached for visual inspection and escort.

From the flight of #aircanada pic.twitter.com/g1Qbpr9EUg

The moment of landing of the Boeing 767-300ER Air Canada

Finally, the aircraft landed well at Barajas - Madrid International Airport where dozens of ambulances and fire engines were ready to intervene.

Coronavirus: Recommendations for the prevention of coronavirus infection in travel