The 3rd transport with medical equipment from Seoul will arrive in Bucharest. Flight operated by Boeing C-17 Globemaster III. 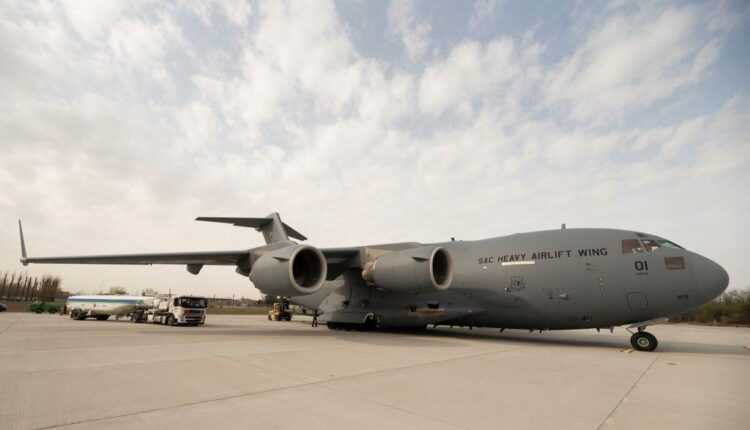 The 3rd transport with medical equipment from Seoul will arrive in Bucharest. Flight operated by Boeing C-17 Globemaster III.

The Ministry of National Defense has requested the Multinational Strategic Transport Unit, which operates from the Pope's Air Base in Hungary, to carry out a new emergency air mission, for the transport of an additional 45 tons of medical protection equipment from Seoul to Bucharest.

The flight mission, the costs of which are covered by the United States in support of the Government of Romania, is performed with a C-17 Globemaster III aircraft.

The equipments, consisting of approximately 100.000 protective suits, were purchased by the Romanian state through the National Centralized Procurement Office and the General Inspectorate for Emergency Situations, in the efforts to combat the effects of the COVID-19 pandemic in our country.

This is the third flight requested by the Ministry of National Defense with C-17 Globemaster III aircraft, and the use of this capability, which is jointly exploited by NATO and partner countries, for emergency missions in the context of managing the coronavirus pandemic, was a premiere within the Multinational Strategic Transport Unit.

The distribution of the protective equipment will be carried out by means of transport provided by the IGSU and, with the support of the county inspectorates for emergencies, they will be distributed and allocated, according to needs, to the medical personnel and the operative crews located on the ground.

The coordination of the flight was achieved, from Romania, by the National Military Command Center of the MApN. The aircraft will land on Otopeni Airport on the night of April 7-8.

Romania signed in 2008, as a founding member, the Memorandum of Understanding for the establishment of the Multinational Strategic Transport Unit, which currently includes, along with our country, nine other NATO countries - Bulgaria, Estonia, Lithuania, Holland, Norway, Poland, Slovenia, the USA and Hungary, and two Peace Partnership member states: Finland and Sweden.