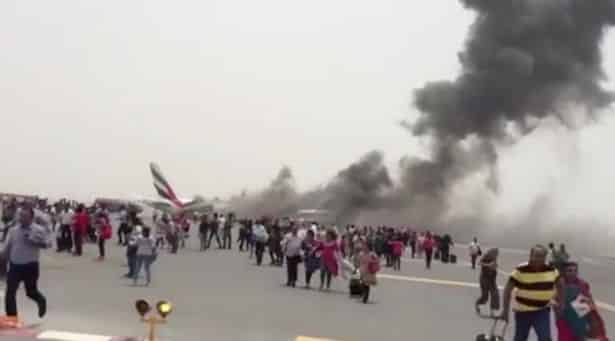 On 3 August, Emirates Boeing 777-300 (A6-EMW) was involved in an accident at Dubai International Airport. Following the landing on the belly, the plane caught fire. Only the rapid evacuation of the aircraft made the accident without victims. The cabin crew did their job very well!

However, a death was reported among the intervention teams. A firefighter died from injuries sustained during the firefighting process.

Pictures also appeared from inside the plane, but also during the emergency evacuation. Watching these videos, we were saddened when we saw the reaction of the passengers. We cannot understand the selfishness and unconsciousness of some. Many stretched for luggage instead of fleeing.

(you can see passengers with luggage - sad)

Through the process of recovering your luggage, you put your life in danger, as well as the people around you. Slow down the evacuation process. If you pull those luggage compartments, you can block the evacuation or injure people.

Repeat! When there is an emergency evacuation, abandon the goods and run away. Your life is in the 90 seconds required to evacuate an aircraft. Any delay can be fatal.