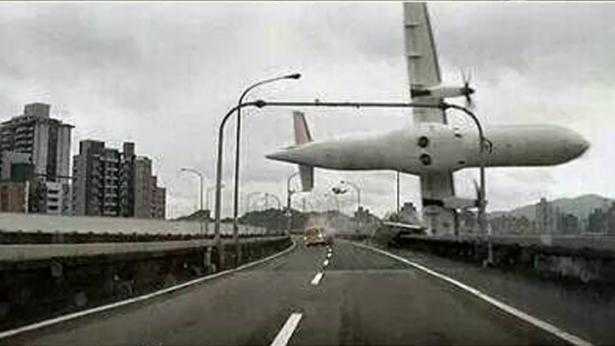 We start this day with bad news. A 72-600 ATR from Transasia Airways crashed into a river shortly after takeoff. The aircraft was scheduled to operate domestic flight GE-235 on the Taipei Songshan-Kinmen Shang-Yi route, but crashed at approximately 10:55 local time in the Keelung River. The aircraft took off from runway 10 of Taipei-Sung Shan Airport at 10:51 a.m. with 58 people on board (53 passengers and 5 crew members).

The plane crashed at 5.3 Km from the airport, and below you have a graph of its trajectory!

Live: Rescue operation and removal of aircraft from water!

According to FlightRadar24.com, the aircraft stayed in the air for approximately 3 minutes, climbed to the maximum altitude of 411.5 meters (1350 feet) and reached the maximum speed of 214 of km / h (116 kts). The recordings with the controller tower show that the pilot asked for help and reported problems to one of the engines. A witness said that the engine on the left (1 engine) stopped. Stopping an engine occurs when the fuel supply is switched off or when the engine is malfunctioning. This leads us to believe that insufficient propulsion may be one of the causes that led to the crash of the aircraft.

However, pilots are trained to deal with situations when they need to fly in an engine, and aircraft are also designed for such cases. There may be other causes of the accident, which will be determined following investigations.

According to information from the press and aviation-safety.net, so far - 18:43 - Romanian time, 31 people have been declared dead, 12 people missing, and 15 people are injured and hospitalized for medical care. The number of victims may increase. Among the passengers were 4 children. They are injured and receiving medical care.

At the time of the crash, the wing of the aircraft hit the concrete edge of the bridge and a taxi was running on the freeway. The driver and passenger were slightly injured and hospitalized for remarks. The moment of the tragic accident was captured by the cameras mounted on the cars in traffic. The images, as if broken from a movie, are dramatic and emotionally impactful.

The aircraft's black boxes were recovered, according to statements made by Mr. Wang Hsing-chung, a spokesman for the Aviation Safety Council. They will be open, and investigators will begin reading the data Wednesday night.

Mr. Chen Xinde, Executive Director of TransAsia Airways apologized to the crew and passengers and conveyed condolences to the families of the deceased.