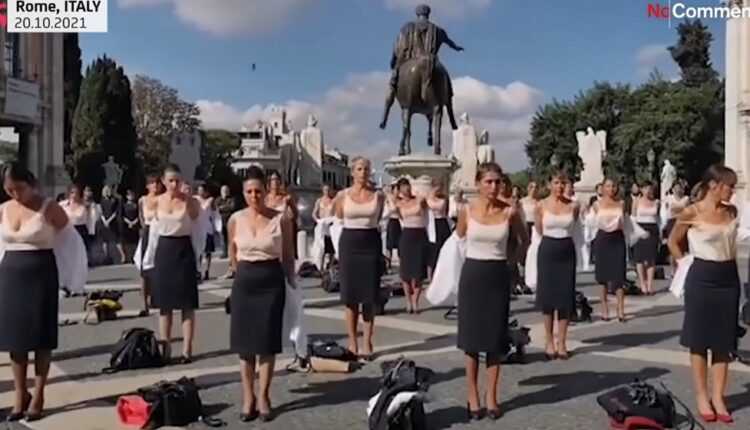 VIDEO: Former stewardesses Alitalia undressed in the center of Rome

On October 15, Alitalia operated the last flight, and all aircraft will remain on the ground from October 16. In place of Alitalia was founded the new state - run company, called ITA Airways.

The new Italian airline has started with 2.800 employees out of the almost 11.000 Alitalia employees, and their number will increase to 5.750 by 2025. It will initially serve 44 destinations, reaching 74 by 2025 and will fly to more destinations. from Italy. Airports such as London-Heathrow and Paris-Charles de Gaulle will not be missing from the ITA Airways network. From November, flights will be operated to destinations in the United States such as New York JFK, Miami, Boston and Los Angeles, and from 2022 there will be flights to Buenos Aires and Sao Paulo.

In this context, the former stewardesses Alitalia undressed in the center of Rome in protest. The women took off their uniforms and wiped their makeup, gestures that wanted to show the devastating impact of disbanding the company.

List of countries at epidemiological risk has been updated by Romania (October 21, 2021)