Shipments to 2013 increased to 12 in a row, exceeding initial targets and the previously established 2012 (588) record with an additional 38 of aircraft.

At the end of 2013, Airbus had a gross market share of 51% (aircraft over 100 seats). Customers' decisions to prefer large aircraft in all segments (A321, A330-300, A350-1000 and A380) have had a positive result on revenues, complementing the position of leader already occupied in the market of single-aisle and large aircraft. . 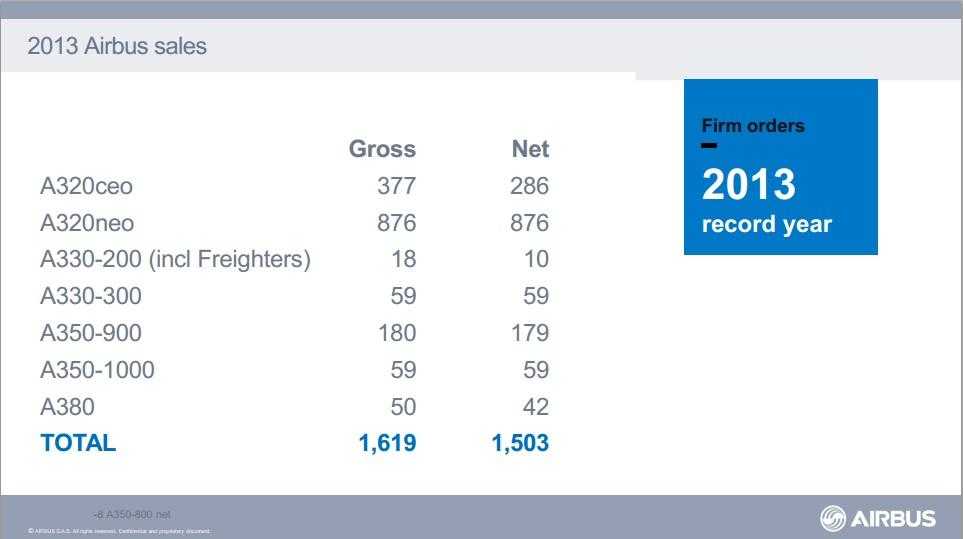 Orders for A320neo exceeded 2.600 by units, while strong sales of A320ceo continued, with over 1.000 of units sold since the NEO launch. The A350 XWB recorded commercial performance especially with the first order in Japan, while A380 continued to dominate the market for very large aircraft with 50 new units ordered.

Reporting the successful transformation of Aibus into a much more agile company, the 2013 year was also notable due to the first flight of the A350 XWB. The tests are progressing well, with two aircraft having already accumulated over 800 flight hours. The certification is scheduled for the 3 quarter and the entry into service for the 4, 2014 quarter. The A330 model with greater autonomy and regional variants was also launched, the production of A330 reached a new record of 10 aircraft per month, while the single-aisle models remained at a rate of 42.

2013 was a good year for the aircraft manufacturers, but also for many airlines. Despite the economic crisis, which is still felt in some areas, the aviation industry is growing.

Do your legs keep you from competing with an Airbus A380? (Competition)

Airbus has listed the prices of aircraft for the 2014