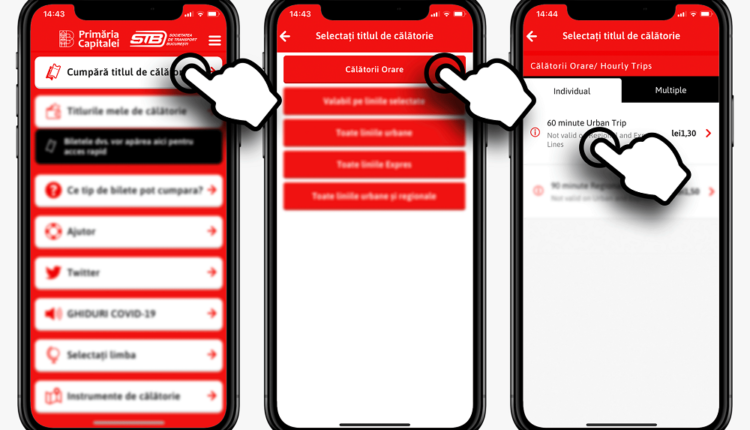 The STB ticket, paid by SMS or application, is valid for one hour and can be used on several lines

On this Monday, March 8, the mayor of the Capital, Nicușor Dan, announces that, starting today, a trip by public transport STB, which was paid by SMS or application, is valid for one hour from the time of payment and can be used on several lines. The price of the trip remains unchanged - 1.3 lei.

For example, for an urban trip, someone who wants to go from Râul Doamnei station to Piata Presei Libere, has to travel 3 stations to Brașov station, from there he changes with tram 41 to reach the final destination. That person no longer pays 1,3 lei for the three short stations and then another 1,3 lei for the rest of the route, but a single ticket, valid for one hour. Payment can be made by SMS to the number 7458 or through the B-pay application.

The STB ticket, paid via SMS or application, is valid for one hour and can be used on several lines

Nicusor Dan also stated: One of the reasons for introducing the hourly ticket is to encourage electronic payment. During the pandemic, we must adapt to new situations, which will offer us as much security as possible in everyday life.

Another advantage of this ticket is that anyone who changes several means of transport saves money and time, precisely because, within an hour, they will pay the ticket price only once. A direct consequence of the introduction of this method of payment we want to be to encourage the payment of the trip by as many beneficiaries as possible and thus avoid losses through non-payment for various reasons, as is unfortunately the case today.

Most importantly now, in the short term, I want public transport to be civilized, clean and predictable. In order to encourage Bucharest residents to make more use of public transport, we must give them these conditions as a matter of priority.

In my personal opinion, the measure is good, only there is a disadvantage - congestion. When the STB means of public transport is blocked in traffic, the validity of the ticket purchased online decreases even if it does not travel.

When validating with the STB card directly in the means of public transport, the journey is valid until the car / tram reaches the end of the line and the system is reset. Not infrequently I traveled with the same car back and forth - on the same line, without being charged because the system was not reset and recognized my previous validation.

It remains to be seen how he will handle this problem as well!

Airlines are preparing to resume flights to Seychelles after lifting restrictions.