At the beginning of July 2015, I announced with great enthusiasm Bucharest - Iaşi domestic route operated by Blue Air. Shortly afterwards I wrote about the new external routes operated from the base in Iasi: IASI - ROME, IASI - PARIS and IASI - LONDON. Today we keep our enthusiasm and announce other 3 new routes operated by Blue Air starting with the 2016 summer schedule: Barcelona, ​​Brussels and Cologne. We'll be back with flight schedule information! Rates start at 27.99 EURO / segment.

Iasi - Brussels from 30 to March 2016, on Wednesdays and Saturdays:

Blue Air It consolidates its position in the eastern part of Romania by opening the base in Iasi, but also by the number of destinations served. In addition to the routes from Iasi, Blue Air is increasing its base from Bacău and introducing a new route departing from the airport in Constanta, but all this in another article. 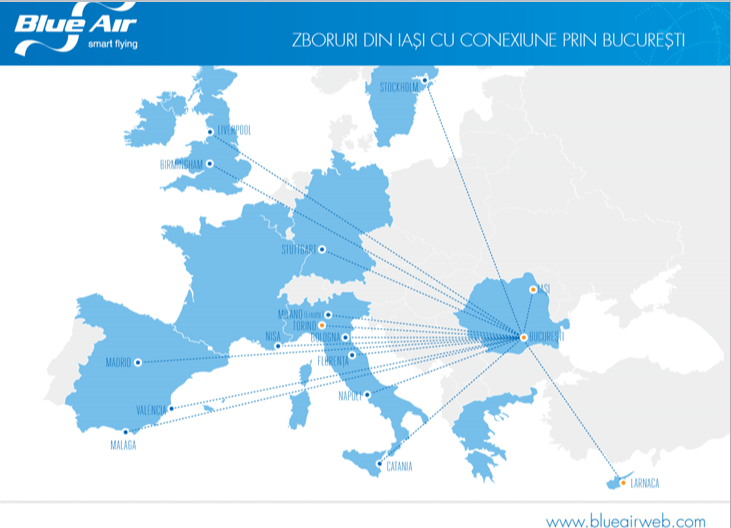 At the same time, you can travel from Iasi to the entire network of external destinations served by Blue Air via Bucharest. The flight schedule allowed these connections with a stopover, coming to the support of the passengers from the Moldovan area. For the internal segment Iasi - Bucharest or Bucharest - Iasi, passengers pay only 18 EURO, an amount that is added to the ticket for the external route departing from Bucharest. And you do not have to worry about hold luggage, as it can be registered for the final destination.