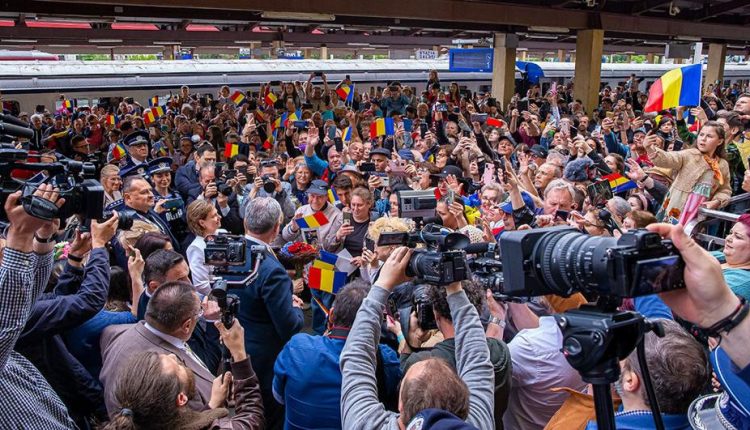 The Royal Family was greeted in Galați by over 2000 people

More than 2 people attended the arrival of the Royal Family in Galați, an event on the occasion of Monarchy Day, May 000.

This year, Galați Railway Station was the destination of the Royal Train journey, where the members of the Royal House were greeted by Mayor Ionuț Pucheanu.

"Today, Galați is the destination of the royal train, even on Monarchy Day. The moment we live in now strengthens our conviction that we are a community that does not forget its history, but one that values ​​the past and looks to the future with confidence. Today's visit proves that our city is truly welcoming, with hospitable people, but also an important economic center, as it must be the largest port on the Danube in Romania. And everything is due to the trust of the people of Galaţi in a solid project for the development of the city", Said Ionuț Pucheanu, the mayor of Galați Municipality.

The three visited the City Hall of Galați and signed the Book of Honor, leaving a message expressing their appreciation for the generous hospitality they received.

The trip of the Royal Family to Galați continues during Wednesday, May 11, and will be accompanied by Mayor Ionuț Pecheanu at the headquarters of the local organization Red Cross, at the Liberty Iron and Steel Works Galați and, finally, at the St. Spiridon.

This year, the purpose of the symbolic journey made by the Royal Family is to recognize the efforts made by local communities in the last two years, during the health crisis and in the context of the armed conflict on the borders of Romania.

Masks will no longer be required in airplanes and airports

An inexperienced passenger managed to land a plane after the pilot was unable to fly.