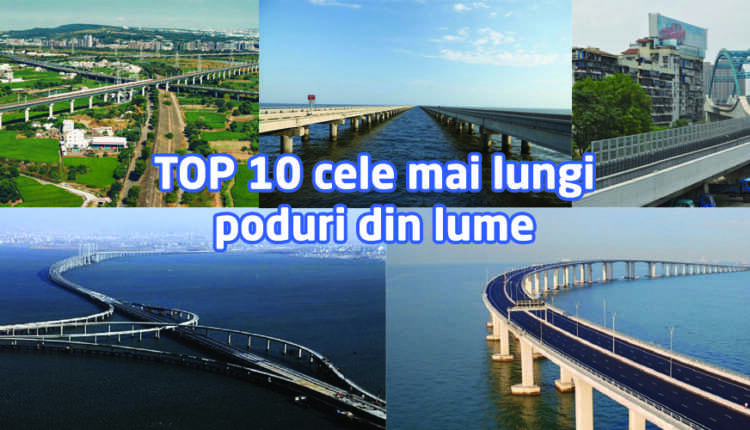 TOP 10 longest bridges in the world

This top demonstrates what people are capable of. During the current global health crisis, it has been found that few people think on a large scale. It is a time when most are worried about the mere passing of the day. However, it is important to think about what your future plans are or to make your post-pandemic travel plans or when the restrictions will be removed. For the human psyche, it is important to think beyond ourselves and beyond tomorrow.

Over the years, people have been shown to be able to push their limits. What seemed like SF 10-20 years ago is now a reality. That's what happened when it came to technology and construction. That's how they came about the tallest buildings in Europe. Driven by needs, people put their minds to work and managed to create real architectural works.

At the same time, they managed to build bridges that seemed impossible. In this article we share our list of the longest and most inspired bridges in the world and what makes them all so wonderful.

Manchac Swamp Bridge is a double concrete structure located in the Pontchartrain Lake area of ​​Louisiana. With a length of almost 23 miles (37 km), it is one of the longest bridges in the world built above water. The bridge is also the longest in the United States interstate highway system. The bridge was built in 1979. The base of the supporting pillars of the bridge was at a depth of more than 250 meters under the swamp. At the time, the construction of the bridge cost $ 7 million / mile.

Fun fact: This is the only bridge on our list that is believed to be haunted by a Cajun werewolf, known as Rougarou, and a voodoo princess. It is also the only one that hosts alligators.

Wuhan Subway Line 1 is not a bridge in the traditional sense. It is actually the longest continuous subway system viaduct in the world. The entire line is almost 24 miles long (38 km) and has 32 stations. It supports a train line passing through Wuhan. Line 1 was opened in 1995 and renovated in 2003.

Fun fact: Line 1 is part of an extensive train system that makes it easier for people to travel to Wuhan.

Lake Pontchartrain Causeway is the longest bridge in the United States and the longest in the world that runs continuously over water. The road consists of two parallel bridges that cross Lake Pontchartrain in southern Louisiana. The longest of the two bridges is almost 24 miles long (39 km). The first of the two bridges was completed in 1956. When traffic on it exceeded capacity, the second bridge was built. Construction was completed and the bridge was opened to traffic in 1969.

Fun fact: The bridge has survived many hurricanes over the years, including Hurricane Katrina in 2005.

With a length of almost 30 miles (47 km), this viaduct connects the two global business centers, Beijing and Shanghai. It is the fourth bridge on the Beijing-Shanghai high-speed railway to be on our list. It was completed in 2010 and officially opened to rail traffic in 2011.

Fun fact: people traveling on the Beijing-Shanghai high-speed railway start or end their journeys on this bridge. It is located just south of Beijing.

With just over 34 miles (55 km) long, this is the longest car viaduct on our list. Construction was completed in early 2000. It is one of the few bridges of record length that does not cross a large body of water. It crosses the Bang Pakong River only a short distance, but is a high, six-lane highway above another highway.

Fun fact: This is a utilitarian-looking structure, but the highway design makes it unique.

This is another Chinese railway bridge that is part of the Zhengzhou-Xi'an high-speed railway. It is just under 50 miles long (81 km). It is unusual because it crosses the Wei River twice, along with several other rivers, including Ling, Luofu, Xi and Shi Di. It was the longest bridge in the world for a short time, after it was completed in 2008 and opened in 2010. However, it was quickly overshadowed by other bridges completed at the same time.

Cangde Grand Bridge is the fourth longest bridge in the world. Completed in 2010, the bridge is part of the Beijing-Shanghai high-speed railway and is the third longest bridge on the railway. The bridge was designed to withstand earthquakes.

The bridge has almost 3.100 pillars. Cangde competes with Tianjin for third place on most lists.

This railway viaduct is over 70 miles (112 km) long. It runs between Langfang and Qingxian, supporting the Beijing-Shanghai high-speed railway. It is the second of the four bridges on our list that are part of that railway system. Its construction was completed in 2010, after four years of work.

Fun fact: This may not be the most beautiful bridge on the list, but its structure is unique. It consists of a series of box beams, each with a length of more than 100 feet (30.5 meters), weighing 860 tons each. The beams were made in two parts, along the route of the bridge, brought where they were to be installed and then placed on keys already placed by a special crane.

This is currently the second longest bridge in the world. It is part of Taiwan's high-speed rail network. The bridge spans nearly 98 miles (158 km) from Banguashan in Changhua to Zuoying in Kaohsiung. It was completed in 2007.

Fun fact: part of what makes this viaduct so unique is that it is part of a series of bridges designed to be earthquake resistant. Allows trains to stop safely during seismic events. The design also limits damage to individual sections of the viaduct so that it can be repaired quickly after an earthquake.

This bridge was completed a decade ago in 2010 and opened in 2011. It holds the record for the longest bridge in the world since then. The structure has a remarkable length of 102 miles (164 km) and stretches between Shanghai and Nanjing, Jiangsu Province, supporting the Beijing-Shanghai high-speed railway over the Yangtze River delta, from Danyang to Kunshan. It is one of the four railway bridges that have entered this list. It took only four years to build this bridge and cost about $ 10 billion. It took more than 10.000 people to complete the construction.

Fun fact: The location of this bridge is amazing, those who cross the bridge can admire plain rice fields, canals, rivers and lakes. The bridge complements - or enhances - the natural views of the areas it crosses. It's a train ride that people never forget.

Israel reopens its borders for vaccinated tourists from around the world, from November 1, 2021.

Travelminit.ro is preparing for Black Friday: discounts of up to 50% for accommodation in Romania!