A Dana Air plane crashed in a neighborhood in Lagos, Nigeria 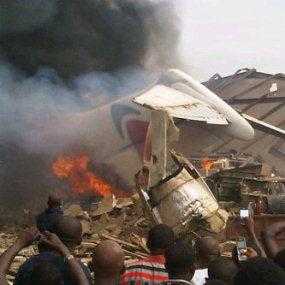 A Dana Air plane crashes in a neighborhood in Lagos, Nigeria (video)

By Sorin Rusi Last updated NOT ANYONE. , NEVER
0 246
Share FacebookTwitterPinterestLinkedinWhatsApp

An airplane Dana Air, with 150 passengers aboard (new information says 147 passengers and 6 crew members) collapsed in a neighborhood in Lagos, Nigeria. The plane hit a two-story building. At the moment of impact, a fire broke out. Nigerian Civil Aviation Authority said there are no chances of surviving.

The neighborhood is near the airport in Lagos. The weather, at the time of the accident, was beautiful and sunny, writes the BBC. photo: http://www.cknnigeria.com

A Boeing 767 Atlas Air aircraft turned back after

An AN-26 plane crashes in South Sudan (photo /…

Nigeria is one of the African countries where civil aviation security is weak. Efforts are being made to raise safety and security standards, especially after 2005 when several serious accidents have occurred. This serious accident comes at 24 hours after a cargo plane exited the runway at Kotoka International Accra, Ghana, and got into a bus. 10 people on the bus died from the impact!

The crashed aircraft was a McDonnell Douglas MD-83. The causes of the accident recorded earlier in Lagos, Nigeria are still unknown!

The accident is still under investigation, but the first results say the aircraft had hit the power lines and then crashed over the building near the airport.